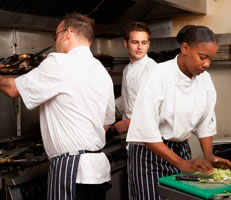 Apprenticeships for adults offer a good return for the public money spent on them overall. However, the Department for Business, Innovation and Skills could improve value for money significantly by targeting resources on areas where the greatest economic returns can be achieved.

"The apprenticeships programme has been providing a good return for public spending. Nevertheless, the Department should set its sights higher in order to get better value from the £0.5 billion and rising now spent on adult apprenticeships each year. It needs to target resources more effectively; confirm the training provided is in addition to what would have been provided without public support; and make sure that the funding system is informed by robust information on the cost of delivery."

Apprenticeships for adults offer a good return for the public money spent on them overall, according to the National Audit Office. However, the Department for Business, Innovation and Skills could improve value for money significantly by targeting resources on areas where the greatest economic returns can be achieved.

The NAO estimates that advanced apprenticeships yield higher returns than intermediate apprenticeships. Spending on adult apprenticeships overall could be producing an economic return of £18 for every £1 of public spending, compared with the Department’s estimate, based on a different set of assumptions, of £28 per £1 spent. But all these estimates assume that the training would not have happened without public funding. The Department has not yet assessed the extent to which this is true. It has commissioned research on the matter and expects to know the results in early 2012. The Department and the National Apprenticeship Service have not so far targeted specific sectors on the basis of economic returns, but intend to do so in future.

Most apprenticeships in England are at a lower level than those offered by other countries. For example, only 33 per cent of apprenticeships are at an advanced level (equivalent to two A-levels), compared with 60 per cent in France.

Overall, the Apprenticeship Programme is well coordinated and is better managed than a previous government programme, Train to Gain, for example by maintaining a central register of approved providers, with a single national contract and account manager for each.

The rates paid to training providers by the Skills Funding Agency on behalf of the National Apprenticeship Service are not based on sufficiently robust information on the cost of the training provision, and so the Agency and Service do not know the extent to which providers may be earning surpluses or incurring losses on some types of apprenticeship. Furthermore, some employers are not paying the expected contribution towards training providers’ costs.