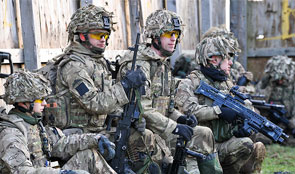 The MOD decision to reduce the size of the regular Army and increase the number of trained Army reserves was taken without appropriate testing of feasibility or evaluation of risk.

"Army 2020 requires an overall reduction in the size of the Army and a fundamental change to its composition, with a significant reduction in the number of regulars and a substantial increase in the number of trained reserves. Military judgement played an important role in decisions but committing to moving towards an Army structure with fewer regular soldiers and an increased number of reserves within the planned timescale should have been subject to more rigorous testing of feasibility. The Department and Army must get a better understanding of significant risks to Army 2020 – notably, the extent to which it is dependent on other major programmes and the risk that the shortfall in recruitment of new reserves will up the pressure on regular units."

The decision by the MOD to implement Army 2020, its programme to reduce the size of the regular Army and increase the number of trained Army reserves, was taken without appropriate testing of feasibility, according to the National Audit Office.

In its report to Parliament, the spending watchdog warns that transition to the new Army structure comes with significant risks which, if they materialized, could significantly affect the Army’s ability to achieve its objectives and value for money.

There has not been a significant growth in the overall trained strength of the Army reserve in the last two years. At April 2012, the trained strength was 19,410. In April 2014 it was 19,400. In 2013-14, a total of 3,020 soldiers entered the Army Reserve.Reserve recruitment targets increase substantially over the next five years. For example, in 2016-17, the Army will need to recruit 9,270 reserves, including 8,000 new recruits. A significant change in performance is therefore required, particularly for new reserves, if the Army 2020 structure is to be staffed in time.

The Army has not publicly detailed what aspects of the transition to Army 2020 it needs to achieve by when for it to operate effectively. This makes it difficult to measure progress towards full implementation. The Army has also not set clear trigger points for enacting any contingency plans. For example, if the reserve recruitment shortfall persists, there is a risk of staffing gaps in some parts of the Army structure and increased pressure on regular units.

Other risks include the significant challenge faced by the Army in implementing Army 2020 alongside other substantial ‘change programmes’, such as a new Army basing programme including the return of UK troops from Germany. Army 2020 also seeks, for the first time, to integrate regulars and reserves fully within a single force structure. However, 65 per cent of regular Army respondents to a 2014 MOD survey believe that regular and reserve forces are not well integrated. In addition, achieving the aims of Army 2020 requires additional funding for equipment which is not yet guaranteed.