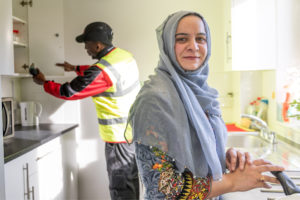 This report examines the government’s replacement of the COMPASS contracts for accommodation and support for asylum seekers.

The Home Office provides accommodation and support for asylum seekers and their families while their cases are processed, under the UK government’s international obligation to support asylum seekers who would otherwise be destitute. The number of accommodated asylum seekers has more than doubled since 2012, to around 48,000 in March 2020, but has been relatively stable since the beginning of 2019.

This report assesses the Department’s early progress towards achieving value for money from the new contracts, measured against its key objectives and taking into account lessons learned from the COMPASS contracts. We assess whether the Department:

It is too early in the life of these contracts for us to reach a definitive value for money assessment of the Department’s current asylum accommodation and support service. We can, however, judge the actions taken to date, as well as the foundations laid for the future of the service. The Department aimed to deliver an improved service that would be sustainable at a reasonable price, meet people’s needs and can be flexed to respond to changing demand.

Against these objectives, the Department is paying more to providers after finding that COMPASS was under-priced and negotiating improvements to the service. Accommodation providers are now beginning to meet service standards, but the AIRE service failed to meet asylum seekers’ needs in its initial months and, despite some improvements, has not yet delivered consistently acceptable performance. Also, the Department faces challenges in adapting services to changing demand and in delivering its plan to redistribute people across the country. To date, the Department has shown that it has learned from the COMPASS contract and has laid the foundations for a better service. The Department now needs to address the challenges we identify, to deliver value for money over the life of these contracts.