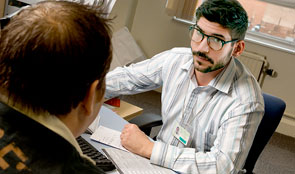 The Department for Work & Pensions is not doing enough to find out how sanctions affect people on benefits.

“Sanctions on benefits have a high opportunity cost, not only for those who are dependent on those benefits if sanctions are applied, but for the efficient use of public resources. “We acknowledge the department's effort to reduce its error rate on sanctions, but we think there is more to do in terms of reducing them further, and in reducing the notable differences in sanctions applications between comparable localities.”

The Department for Work & Pensions (DWP) is not doing enough to find out how sanctions affect people on benefits, according to today’s report from the National Audit Office.

A benefit sanction is a penalty imposed on a claimant meaning a loss of income when someone does not meet conditions like attending jobcentre appointments. Sanctions are not rare: 24% of Jobseeker’s Allowance claimants received at least one between 2010 and 2015. Use of sanctions varies substantially, with some Work Programme providers referring twice as many people for sanctions as other providers in the same area.

Today’s report finds that jobcentres’ monthly sanction referral rate for Jobseeker’s Allowance claimants rose to 11% in March 2011 then fell to 3% in December 2015. There are many reasons for this variation but it cannot be fully explained by changes in claimant behaviour. The NAO concludes it is likely that management focus and local work coach discretion have had a substantial influence on whether or not people are sanctioned.

Today’s report recommends that the Department for Work & Pensions carries out a wide-ranging review of benefit sanctions, particularly as it introduces further changes to labour market support such as Universal Credit. The DWP has commissioned independent reviews and taken steps to improve processes but rejected previous calls for a wider review. The NAO finds that the previous government increased the scope and severity of sanctions in 2012, and recognised that these changes would affect claimants’ behaviour in ways that were difficult to predict.

International studies show people who receive sanctions are more likely to get work, but the effect can be short-lived, lead to lower wages and increase the number of people moving off benefits into inactivity. The DWP has not used its own data to evaluate the impact of sanctions in the UK. The NAO undertook preliminary analysis of the impact of Work Programme sanctions on employment, inactivity and earnings. The results show the Department should do more to understand these sanctions outcomes.

Sanctions have costs, for people who receive them and for the government. The Department does not track the costs and benefits of sanctions, but estimates that it spends £30-50 million a year applying sanctions, and around £200 million monitoring the conditions it sets for claimants. The NAO estimates the Department withheld £132 million from claimants due to sanctions in 2015, and paid them £35 million in hardship payments. The overall impact of sanctions on wider public spending is unknown.