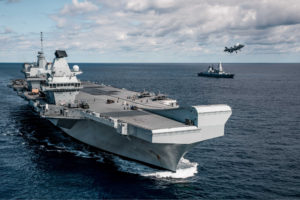 This report examines the MoD's management of the programme since 2017 and the risks towards achieving Carrier Strike's full capabilities.

Carrier Strike provides the ability to launch fixed-wing aircraft from a ship to undertake a range of military tasks. It is central to the government’s plans for the country’s armed forces and the first step towards Carrier Enabled Power Projection (CEPP), which is the government’s ambition to be able to respond to conflicts and support humanitarian relief efforts anywhere in the world at short notice.

Carrier Strike will be based around two Queen Elizabeth Class aircraft carriers – the largest warships ever built for the Royal Navy – together with Lightning II jets, which are being bought through the United States Department of Defense’s international programme. The Ministry of Defence (the Department) is also buying a new airborne radar system, Crowsnest, to help protect a carrier strike group. Depending on the type of deployment, the carriers will be accompanied by at least one destroyer, an anti‑submarine warfare frigate, and ships for support and resupply.

Since 2011, we have reported four times on the Department’s progress on Carrier Strike. Our early reports covered the decisions about the type of carrier and jets that the Department bought. In 2017, we highlighted that the phase to 2020 would be crucial and there was little room for manoeuvre in the delivery schedule. In this report, we examine how the Department has managed the programme since 2017 and how it is addressing the risks towards achieving the full capabilities of a carrier strike group. We set out:

Our report focuses on the Department’s approach to addressing the risks to achieving the capabilities of Carrier Strike. We do not evaluate the military or wider capabilities that Carrier Strike will provide, or the plans for its operational use.

Since we last reported, the Department has received two new aircraft carriers into service, now has 18 Lightning II jets and has developed much of the UK infrastructure to support them. It has delivered the carriers for £6.4 billion, which is just 3% above the revised figure announced to Parliament in 2013. The Department has conducted successful sea trials and is working closely with the US to be ready for its first joint deployment in 2021. It has also established plans for using Carrier Strike in its early years.

The Department is, however, making slower progress in developing the crucial supporting activities that are needed to make full use of a carrier strike group, such as the Crowsnest radar system and the ability to resupply the carriers. In addition, it has not established a clear view on the future cost of enhancing, operating and supporting Carrier Strike, which creates the risk of future affordability pressures. The Department will not achieve value for money from its investment to date unless it provides clarity on its future ambitions; develops its understanding of future development and operating costs; and ensures cross-command coherence and collaboration to develop the full capabilities of Carrier Strike.