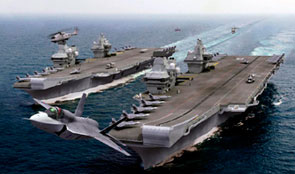 The MOD acted promptly to revert to the decision to buy the vertical take-off version of the Joint Strike Fighter but will have to manage significant risks.

“It is good that the MOD acted promptly, once it became clear that pursuing the option to buy the carrier variant aircraft would cost a lot more money and add another three years to the whole programme. But to achieve value for money in this project, the Department will have to manage significant technical and affordability risks and be consistent in sticking to the present plan.”

The Ministry of Defence acted quickly once it realized, in early 2012, the extent to which its 2010 decision to procure the carrier variant of the Joint Strike Fighter (JSF) had been based on immature data and flawed assumptions. In May 2012, the Department announced that it was reverting to procuring the short take-off and vertical landing (STOVL) variant of the fighter. In a report published today examining that 2012 decision, the National Audit Office has called for the Department to introduce a degree of consistency in decision-making not previously apparent in the Carrier Strike programme and to work within the financial and capability assumptions underpinning the decision, if it is to deliver value for money.

By February 2012, the estimated cost of converting the aircraft carrier for the carrier variant of the JSF, requiring the ship to be fitted with catapults and arrestor gear (‘cats and traps’), had increased by 150 per cent: from £800 million to about £2 billion.  As a result, the Department estimated that, over the next ten years, the STOVL option would be £1.2 billion cheaper than the carrier variant. This difference halves to £600 million over 30 years.

Another key factor was that the carrier variant option of the JSF could also not be delivered until 2023, three years later than the planned date of 2020. The Chief of Defence Staff judged that, in the emerging security environment, such a gap in capability would be undesirable. When the Department reverted to the STOVL option, it announced that it would deliver the Carrier Strike by 2020. However, a week later, it delayed investment in Crowsnest, the helicopter based radar system making up the third element of Carrier Strike, meaning that the system is not now scheduled to be fully operational until 2022, two years later than the carriers and aircraft.

Resolving the future of the Carrier Strike programme (comprising the Queen Elizabeth class aircraft carriers, the Joint Strike Fighter aircraft operating from them and Crowsnest) was central to the Department’s efforts to balance its ten-year equipment budget. When the implications of the 2010 decision became clear, the Department acted quickly to put in place a unique, streamlined approvals structure, with focused attention from senior officials. This was crucial to the pace of decision-making.

The Department expects to write off £74 million as a result of the reversion decision; but this cost could have been ten times higher if the decision had been made after May 2012.

Today’s report notes that the carrier variant of the JSF has a greater range and payload than the STOVL variant and would have provided a more effective strike capability. However, STOVL creates the option to operate Carrier Strike from two carriers, providing continuous capability. By contrast, the carrier variant could operate from only the one carrier installed with cats and traps and therefore could provide capability for only 70 per cent of the time.