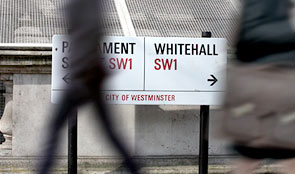 Staff numbers and costs have reduced significantly in the last five years. Not enough planning, however, has gone into making sure that the reductions are sustainable.

“Departments have significantly cut their staff numbers and costs in the last five years but not enough planning has gone into making sure that, over the longer term, the reductions already made and any required in future are sustainable and do not damage the delivery of public services. The centre of government must do more to help departments meet these challenges, including managing the heightened risk of a shortage of vital skills.”

Government departments have made significant reductions in their staff numbers and salary bill since 2010, according to a report today by the National Audit Office. This has been achieved mainly by minimizing recruitment, a cheaper option in the short term than paying staff to leave, but resulting in older staff comprising a greater proportion of the workforce. Today’s report points out that this changing of the age profile in the civil service might increase the risk of a shortage of talent and skills in future.

Because of the restriction of recruitment, the percentage of the civil service workforce aged 20-29 reduced from 14% to 9% from 2010 to 2014 while the percentage of 50-59 year-olds increased from 26% to 31%. The proportion of staff in the most junior grades reduced over the same period from 46% to 40%. There is a growing awareness in government of the risk these low levels of recruitment may bring, such as not having the talent and skills needed for future challenges, although there is not yet a clear understanding of the potential consequences or the necessary management actions.

Today’s report underlines that in the new Parliament departments may need to manage any future staff reductions strategically, to reduce the risk of damaging public service delivery. However, some departments have made less progress than others in setting out their long-term operating models. The Public Accounts Committee reported in 2012 that departments did not have long-term plans to work with fewer staff. Transformation in departments has not been as widespread or advanced as expected.

The NAO examined four departments as case studies (HMRC, MoD, DfT and DfID), and found that in general they had not yet fully implemented strategic workforce plans across their groups.  They also lacked comprehensive information on workforce skills and some had not completed detailed plans for the period after 2015, increasing the risk of not being well-informed when they go into the next spending review.

To achieve value for money, departments face the challenge of ensuring that their reductions are sustainable. They must prioritise the developing and strengthening of their long-term operating models and strategic workforce plans, and ensure they recruit or develop the critical skills needed. The centre of government is building its strategic role, but must do more to support departments to meet these challenges: for example, by providing more expertise and allowing them to manage their pay bill flexibly.