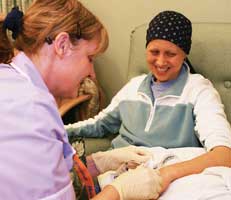 Improvements and efficiencies have been made in key areas of cancer care since the Cancer Reform Strategy was published. However, a lack of high quality information on costs of cancer services and their outcomes inhibits substantial further improvements.

"The Department of Health's strong direction and high profile leadership has resulted in improved cancer services in key areas. Further improvement depends, to a significant degree, on raising standards of practice around the country up to the best. A key factor in driving this is a much improved approach to information on cancer services."

Improvements and efficiencies have been made in key areas of cancer care since the Cancer Reform Strategy was published in 2007, according to an NAO report today. However, a lack of high quality information on costs of cancer services and their outcomes inhibits substantial further improvements. The performances of Primary Care Trusts (PCTs) still vary significantly and there is scope for greater efficiencies, worth hundreds of millions of pounds each year, in the delivery of care.

There have been high levels of achievement against cancer waiting times standards and significant reductions have been made in the number of days cancer patients spend in hospital – largely as a result of increasingly treating patients as day cases. However, whilst the Strategy aimed to minimise emergency admissions for cancer patients, these are still increasing, with wide variations between PCTs and poor understanding of the reasons for those variations.

The NAO estimates that cancer cost the NHS approximately £6.3 billion in 2008-09, but the Department of Health has limited assurance as to whether the implementation of the Strategy is achieving value for money. Reported spending on cancer care varies between PCTs – in 2008-09 varying from £55 to £154 per head – and there is unexplained variation from year to year.

There are opportunities to achieve better outcomes and free up resources to meet the increasing demand for cancer services. For example, by reducing the average length of stay in hospital to the level of the best performing PCTs, efficiencies worth some £113 million a year could be achieved. And if the number of inpatient admissions per new cancer diagnosis was reduced to the level of the best performing PCT, bed days equivalent to around £106 million each year could be saved. In addition, radiotherapy machines could be used more productively to help the NHS meet increasing demand.

High quality information is essential to be able to commission services successfully and to monitor performance. Some information on cancer has improved, but significant gaps still remain. For example, data on chemotherapy activity and outcomes are poor and the introduction of a national chemotherapy dataset is almost two and a half years behind the original commitment made by the Department.