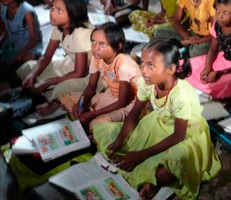 DFID has successfully supported developing countries in progress against goals of universal enrolment in primary education and improved educational prospects for girls. However, more emphasis on quality and cost-effectiveness is important.

"DFID support to primary education in developing countries has helped increase provision, with enrolment levels rising greatly, especially for girls. More emphasis now needs to be placed on quality, attainment and cost-effectiveness and DFID has begun to move in this direction. In my view it needs to do more and to take a tougher, clearer stance on the importance of cost and service performance information, and in particular indicators of education delivery and attainment if it is to make sure that its contributions achieve the maximum good effect."

The Department for International Development has successfully supported developing countries in progress against goals of universal enrolment in primary education and improved educational prospects for girls, according to a report published today by the National Audit Office. However, quality of education and levels of attainment remain low and pupil and teacher absenteeism is still too high. The report concludes that, given tight resources for education in developing countries, a greater emphasis on quality and cost-effectiveness to achieve good value for money is especially important.

DFID’s 22 priority countries have made significant progress towards universal enrolment: from typically 50 per cent of children or lower in the mid-1990s to 70 per cent to 90 per cent now. But pupil drop-out is high; typical drop-out rates are 10 per cent to 15 per cent in year one and completion of primary education is low, ranging from 57 per cent of children in Nepal to 17 per cent in Malawi. Because pupil and teacher attendance is poor, there are insufficient teaching hours. And, although pupil attainment has been poorly measured, the information that is available shows low levels of literacy and numeracy.

Since 2001 DFID, along with other donors and recipient governments, has focused on enrolment more than the quality of education. It has started to redress this imbalance but needs to focus more on key factors like teacher and pupil attendance, quality and attainment in its interventions.

Typically, salaries – mostly those of teachers – consume 90 per cent of education budgets in developing countries, yet pay is not routinely monitored. Wage-bills have reached levels which limit the affordability of educational expansion in DFID priority countries. There are other opportunities to work with governments to help raise cost-effectiveness: non-formal education initiatives designed to reach remote or migrant communities have features which could be applied successfully in formal schools.