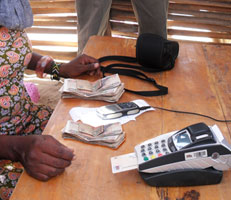 DFID is successfully reaching particularly poor people with transfers, but needs to focus more on how cost-effectively they are delivered.

"Direct transfers have been targeting aid at some of the most impoverished and vulnerable people in developing countries. The transfers show clear immediate benefits including reduced hunger and raised incomes. The Department must now get a firmer grip on the efficiency of its chosen transfer approaches"

Directly providing international aid to the most poor and vulnerable people is showing clear and immediate benefits, according to the National Audit Office.

The Department for International Development is successfully using such transfers to reach particularly impoverished populations in challenging places. The transfers – usually in the form of cash payments, food transfers or agricultural assets, such as livestock – typically reach their recipients more quickly and transparently than more widely prevalent ways of delivering aid. Today’s report points out that transfer programmes are demonstrating important characteristics of good value for money but the Department remains under-informed on some key elements of cost-effectiveness. Therefore, the Department has not optimised value for money.

The transfer of aid to poor households has resulted in clear short-term benefits, for example in relation to improved diet or investment. Of the programmes we examined five out of seven stated objectives showed positive change, the other two were mixed. There is also some evidence for longer-term effects in the form of improved livelihoods, health and education, where measured and where programmes have been running for some time. Where evidence is available, the NAO found that the Department successfully targets transfers on those most in need.

The Department does not have sufficient analysis of costs of transfer programmes to know whether what it is spending represents the best possible value for money and is under-informed about efficiency. Electronic transfers can be a generally more efficient and reliable way of reaching more isolated people. They are not yet widely used by the Department, although there are plans to extend their use. Nor does the Department consistently compare the cost-effectiveness of transfers with that of other design options. It also does not know whether the amount it transfers is set at the optimal level because its programmes are generally not analysed for different payment levels to assess which might lead to the best results relative to the costs.