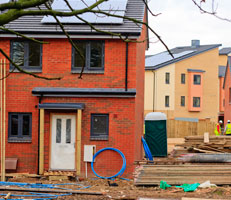 The Programme launch has been successful, however key risks remain such as the planned delivery of new homes towards the end of the programme period.

"The Affordable Homes Programme has made a good start, with providers committing themselves to building some 24,000 more homes than originally expected. "There are key risks, however, including the fact that more than half of the homes are planned for the final year, with no room for slippage. The final judgment on the success of the Programme will depend on how well these risks can be managed between now and 2015."

The National Audit Office has today published its report on the Government’s new Affordable Homes Programme, aimed at delivering below market price housing.

The report found the launch of the Programme by the Department for Communities and Local Government and the Homes and Communities Agency to be a success, with providers committing themselves to building some 80,000 homes for the £1.8 billion of government investment, compared to the initial target of 56,000.

However, key risks remain. Nearly a fifth of contracts with housing providers remain to be signed; more than half of the planned homes are not currently due to be delivered until the final year of the Programme; and some providers are concerned that they may not be able to charge rents at the levels they originally agreed with the Programme.

The development of the new funding model for affordable rent and home ownership was led by the Department and the Homes and Communities Agency. The new Programme will be delivered by housing associations, local authorities and other housing providers, who were able to bid for Programme funding during 2011.

The new model means the Department pays less grant per home than under previous schemes (£20,000 compared with £60,000 under the previous National Affordable Housing Programme), while housing providers borrow more and can charge higher rents. The new scheme represents a reduction of 60 per cent in average annual spending on affordable homes over the four years of the Programme from 2011-12 to 2014-15, when compared to the three years up to March 2011.

The Programme will increase providers’ financial exposure, with the sector facing challenges in securing bank financing for capital investment and over the cost of supporting both future and existing debt.