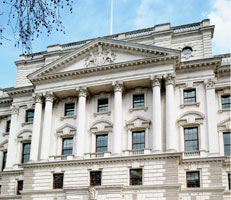 "By introducing an Infrastructure Finance Unit, the Treasury helped reactivate the market and prevent the stalling of many government projects. During 2009, the cost of finance built into the PFI programmes at that time was value for money, but there is no guarantee that it will remain that way. Now that the market is providing finance again, a project by project review should be carried out using stricter criteria, to establish the most appropriate funding methods."

The National Audit Office has concluded that, by setting up an Infrastructure Financing Unit, HM Treasury helped reactivate the lending market for private finance projects which was putting government PFI programmes in doubt as a result of the credit crisis. While the extra finance costs for projects in 2009 were value for money in the short term to achieve the government objective of stimulating the economy, the Treasury should not presume that continuing the use of private finance at current rates will be value for money.

Bank lending was so restricted in late 2008 that no sizable contracts could be let. The Treasury helped to reactivate the lending market for infrastructure projects and improved the market confidence by setting up its own Finance Unit in March 2009. The Unit helped to finalize a large waste treatment and power generation project. Subsequently, 35 projects, including the contract to widen and maintain the M25, were signed without any further public lending.

In line with policy on acting to stimulate the economy, the Treasury and other government departments gave priority to closing deals at the prevailing market rates, even if this meant the public sector paying more, and the banks carrying less risk. Analysis by the NAO suggests that higher financing costs increased the annual charge of PFI projects by six to seven per cent and that between £500 million to £1 billion of higher cost has been built in over 30 years, partly offset by an increased public sector share of refinancing gains.

The opinion of the NAO is that the extra finance costs of projects financed in 2009 were value for money in the context of stimulating the economy. The NAO also considered whether reconsidering business cases – which might result in projects being postponed or discontinued – would have improved value for money. The NAO found that this might have put policy objectives to give a boost to the economy at risk and would not have been a reasonable yardstick to assess the protection of value for money.

The NAO recommends that there now be a thorough project by project review of the forward programme to apply more exacting and narrower criteria than applied to projects at the height of the crisis.