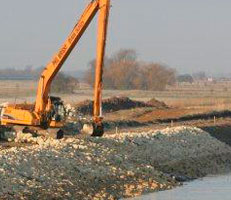 Giving greater responsibility and discretion to local authorities to identify flood risk and target investment raises significant challenges, especially during a time of budget cuts and other newly devolved responsibilities. Greater value for money can be achieved through these reforms, but key elements of what is required are not yet in place.

"Greater local discretion over how funding is targeted has the potential to improve value for money in flood risk management. Local bodies will have to meet the new expectations placed on them - including that of raising investment locally - while under the pressure of delivering on other newly devolved responsibilities. If these challenges are not met, the Department's reforms will have failed to fulfil their potential to increase levels of investment in flood management and value for money to the taxpayer."

The National Audit Office reports today that giving greater responsibility and discretion to local authorities to identify flood risk and target investment raises significant challenges, especially during a time of budget cuts and other newly devolved responsibilities. The NAO considers that greater value for money can be achieved through these reforms, but key elements of what is required are not yet in place.

Local knowledge of surface water flood risk is far less advanced than national information on risk of flooding from rivers and the sea. Local authorities are experiencing difficulty in recruiting and retaining appropriately qualified staff. Only 30 per cent of the local authorities the NAO spoke to thought they had the required technical expertise. Local decision-making is hampered by the need to cross-refer between nearly 20 different plans that affect local flood risk management. It is not yet clear how the Department and the Environment Agency will provide assurance nationally that arrangements are working.

The Environment Agency has improved its own efficiency since the NAO last reported in 2007. The Agency has a better understanding of the condition of existing sea and river defences. It has brought 98 per cent of defences classified as ‘high consequence’ if they fail, up to target condition and is directing more of its funding towards these defences. In addition, the Agency has provided better flood protection for 182,000 households against a target of 145,000.

The Agency estimates that, owing to climate change and ageing defences, an increase of £20 million is required on average each year between 2011 and 2035 to maintain the current level of flood protection. However, central government funding to the Agency has reduced by 10 per cent over this spending review period compared with the last. If central funding does not increase after 2014-15, maintaining and improving the nation’s flood defences will depend on significant additional funding being secured locally. Currently, some 95 per cent of funding is provided by central government.

The NAO found that local bodies will be hard-pressed to plug any funding gap while under pressure to deliver a number of other newly devolved responsibilities. And the Department’s plans to encourage more local funding could see some defence schemes that have attracted private or other funding going ahead in advance of schemes elsewhere that provide greater benefits.