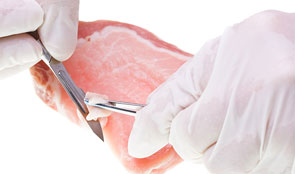 Food safety and authenticity in the processed meat supply chain

The horsemeat incident in January 2013 exposed weaknesses in control in the food supply chain.

“The January 2013 horsemeat incident has revealed a gap between what citizens expect of the controls over the authenticity of their food, and the effectiveness of those controls in reality. The division of responsibilities for food safety and authenticity has created confusion. The Government needs to remove this confusion, and improve its understanding of potential food fraud and how intelligence is brought together and shared."

A report by the National Audit Office has found that, while arrangements for identifying and testing for risks to food safety are relatively mature and effective, similar arrangements for the authenticity of food are not. Government failed to identify the possibility of adulteration of beef products with horsemeat despite indications of heightened risk.

According to today’s report, a split in responsibilities for food policy between the Food Standards Agency and two Whitehall departments in 2010 has led to confusion among stakeholders about the role of the Agency and Defra in responding to food authenticity incidents.

An Agency review found that some of their staff and local authorities were confused, during the early stages of the response to the January 2013 incident, about why the Agency was taking the lead in investigating the incident. Local authorities said they continue to be unclear on whom to contact in certain areas of food policy.

Local authorities reported 1,380 cases of food fraud in 2012 – up by two-thirds since 2010. The Government recognizes that it needs to address weaknesses in its intelligence gathering and sharing and its understanding of opportunities for fraud throughout the modern food chain.

The Agency does not have a complete picture of all public testing. Only one-third of English local authorities record laboratories’ test results on the Agency’s national database. The total number of food samples tested by official control laboratories in England has gone down by a quarter since 2009-10. Although a substantial amount of testing is carried out by private food businesses, public authorities do not know the amount, nature or results of these tests. Government is working with industry to identify and overcome barriers to sharing intelligence.

Among the NAO’s recommendations is that some resource should be shifted from such activities as the inspection of slaughter houses to the checking of the manufacture of processed meat products and the long supply chains involved, but this will require European agreement.