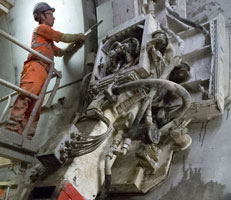 The NAO has highlighted five risks to the value for money of some national infrastructure projects.

"Economic infrastructure keeps the country running. Demand for infrastructure is set to increase, fuelled by population growth, technological progress, climate change and congestion." "But there is a lot at stake in taking forward the national infrastructure plan in an environment of straitened resources, with real risks to value for money and uncertainty about the sustainability of piling costs on to consumers. "I have made a number of recommendations which look to the Treasury, departments and regulators to provide greater clarity on the costs which taxpayers and consumers will bear. Work is already in hand to drive down the costs of delivering new infrastructure and this should continue."

The National Audit Office has highlighted five key risks to the value for money of projects included in the government’s national infrastructure plan.

The government expects £310 billion to be spent by 2015 and beyond on new infrastructure projects in sectors such as energy, rail, roads, water, waste, flood defences and digital communications. Such large-scale infrastructure projects pose significant challenges. With limited funds available, the government is looking to private companies to wholly own and finance around 64 per cent of the £310 billion, with the burden of funding likely to shift towards the public as consumers rather than taxpayers.

The first of the risks to achieving value for money is that forecasters might get wrong the need for infrastructure in the long term (demand forecasting for many years ahead is an inexact science). Secondly, uncertainty over government policy might lead project sponsors, lenders and contractors to defer or abandon projects in the UK for opportunities elsewhere.

Thirdly, there is the possibility of a failure to take into account the cumulative impact on consumers of funding those infrastructure projects where the costs are recovered by charging users. Increasing the burden on consumers may increase the risk of financial hardship, or the need for unplanned taxpayer support. The full impact of spending on economic infrastructure in the years ahead is unclear. While there is information on individual sectors, no overall assessment has been undertaken by government.

Taxpayers may be exposed to substantial losses as a result of government guarantees to bear some project risks (such as cost overruns) should they materialize. The government has taken steps to attract new sources of finance. One of these steps has been its offer to give guarantees to attract construction finance which, while it may help to source new finance, may also expose government to increased financing risk. The Treasury is seeking to address the final risk, that delivery costs might turn out to be higher than they should be, with a cost reduction programme aimed at reducing costs by 15 per cent.

The NAO has made a series of recommendations to help ensure value for money is achieved. It calls for the Treasury to work with departments and regulators to provide greater clarity for consumers regarding the financial impact of planned infrastructure investment. Where there are limits on affordability and availability of finance, the NAO notes that the Treasury and departments may need to refine their prioritization of infrastructure programmes and projects.