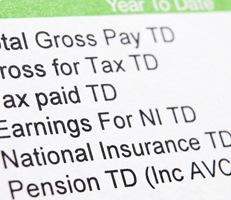 HMRC has taken significant steps to improve the efficiency of National Insurance administration, but needs to demonstrate more clearly that it is providing value for money from the £350 million it spends each year and take advantage of opportunities to secure further savings.

"In recent years HM Revenue and Customs has adopted a more structured approach to improving its administrative processes. The significant reduction in staff deployed on National Insurance work demonstrates how reforming processes can deliver savings for the taxpayer.

"HMRC now needs to stand back and establish how best to administer the National Insurance system in the future so that it delivers the required levels of accuracy at a minimum cost."

HM Revenue and Customs has taken significant steps to improve the efficiency of National Insurance administration. It has managed to reduce staff numbers substantially while avoiding any major operational failures. However, HMRC needs to demonstrate more clearly that it is providing value for money from the £350 million it spends each year and take advantage of opportunities to secure further savings.

Each of the main operational areas within HMRC has successfully reduced the number of staff employed on National Insurance work. Staffing levels fell by between 16 per cent and 31 per cent between 2006-07 and 2009-10. In the area of HMRC with responsibility for maintaining National Insurance records there were 1,200 staffing reductions. But HMRC does not have a clear picture of the total costs of the system and how these have changed.

During the period of change there have been no significant operating failures across the system of collecting and recording National Insurance contributions. Furthermore, there are examples of significant increases in productivity in processing information. However, HMRC has not achieved all of its National Insurance performance targets. In particular, while it has improved its accuracy in processing data, in 2009-10 the Department achieved 93 per cent accuracy against its target of 97 per cent.

There are a number of ways in which HMRC could improve how the system of National Insurance functions. On accuracy, HMRC needs to ensure standards of accuracy for National Insurance records are applied consistently across all operations and take account of the longer term costs and consequences of inaccuracies in processing. On efficiency, although some improvements would depend on the availability of funding for IT enhancements, considering the system in its entirety would help secure savings.