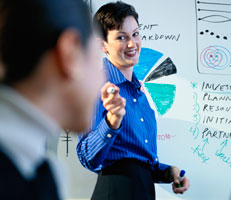 Despite major expenditure by central government departments,weaknesses in departmental strategies and governance arrangements have limited the effectiveness of skills development activities.

"Tight public funding means that departments must find ambitious new ways of working to maintain and drive up levels of performance. Key elements of success will be knowing what skills are needed and which staff have them, and then deploying those staff to where they are most needed. These key elements are not presently in place in many departments and need to be driven urgently to be in step with major change programmes."

Despite major expenditure by central government departments on developing the skills of their staff, government does not know how much is being spent and has rarely evaluated its impact on performance. Government’s estimate of £275 million (or £547 for each civil servant) in 2009-10 is a significant underestimate. In addition, only 48 per cent of civil servants said that the learning and development they received in the last 12 months had helped them to be better at their job.

Today’s report by the National Audit Office notes that, while the picture is not uniform, weaknesses in departmental strategies and governance arrangements for identifying and addressing skills needs have limited the effectiveness of skills development activities in meeting departmental business needs. Management responsibilities have been complicated and unclear, leading to incomplete and unreliable information on what skills development is being undertaken, by which members of staff and at what cost.

Insufficient standardisation across departments and limited use of central government’s buying power to cut costs have undermined value for money. At one stage, there were over 250 different leadership courses in use across government, with charges for management and leadership training varying four-fold between suppliers. There has also not been enough attention to on-the-job learning, with unnecessary costs incurred through over-reliance on more expensive forms of training and poor management of attendance rates.

Government has recognized some of these issues and has recently introduced major changes to the way departmental HR functions operate, designed to achieve efficiencies and better alignment with departmental business needs. A new cross-government learning and development service called Civil Service Learning became operational in April 2011. While these changes are designed to address some of the weaknesses identified by the NAO, it is too early to say if they will be implemented consistently and effectively across departments.