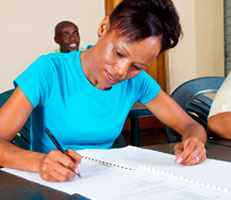 This system was implemented by the UK Border Agency with predictable flaws. The Agency has taken little action to prevent and detect students overstaying or working in breach of their visa conditions.

"The UK Border Agency implemented its new student visa system without key controls in place. The flaws in the system were both predictable and avoidable. "The Agency regards students who do not comply with their visa conditions as a low priority compared with illegal immigrants and failed asylum seekers, and is slow to take action to deal with such students. Action planned by the Agency to ensure that those with no right to remain in the UK are identified and required to leave must now be pursued more vigorously."

The National Audit Office has today issued a report on the 2009 implementation of a points based route, known as Tier 4, by which students from countries outside the European Economic Area can study in the UK. The report has found that the UK Border Agency implemented Tier 4 with flaws which were predictable and could have been avoided. The Agency has not dealt efficiently and effectively with overstayers and students in breach of the rules.

Under the previous system of student immigration for non-EEA students, replaced by Tier 4, there was no limit to the number of students whom a college could enrol and students were free to move college and course as they wished without notifying the Agency. Under Tier 4, each student must be sponsored by educational institutions licensed by the Agency and cannot change college without applying to the Agency. Sponsoring colleges are responsible for judging students’ intentions to study.

The Agency implemented Tier 4 before the key controls were in place. Based on college enrolment rates and changes in application patterns, the NAO estimates that, in its first year of operation, between 40,000 and 50,000 individuals may have entered the UK via Tier 4 to work rather than to study. The Agency did not check that those who entered the UK as students were attending college.

The Agency has taken little action to prevent and detect students overstaying or working in breach of their visa conditions because the Agency regards them as low priority compared to illegal immigrants and failed asylum seekers. The Agency has removed 2,700 students since 1 April 2009 but has been slow to withdraw students’ leave to remain in the UK, where it has cause to do so. This has meant that, in many cases, enforcement teams have been unable to arrest students found working and not attending college.

The Agency currently does little to ensure that people leave the UK when their visa extension requests have been refused. Action to check that those refused visa extensions leave as required is patchy. The NAO employed a specialist contractor to try and locate 812 people the Agency was looking for. At a cost of £3,000, in one week the contractor found addresses for a quarter of the Tier 4 cases supplied, which the Agency is in the process of checking.

The Agency introduced new controls in 2011 and a fully-documented compliance strategy in December 2011 that are likely to reduce the number of problem students. But it will not be possible to determine the value for money of the Points Based System for students, unless the Agency establishes ways to measure its success in tackling abuse, including how it deals with overstaying, and to establish the full cost of its Tier 4 related activities.