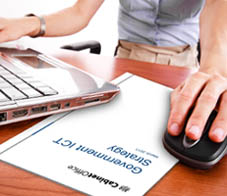 The NAO commends the early progress being made by the Government in implementing its ICT Strategy but has identified areas where progress has not kept pace with the Government’s ambitions.

"ICT is going to play an increasingly important role in changing how government works and how services are provided. The Government’s ICT Strategy is in its early days and initial signs are good. However, new ways of working are as dependent on developing the skills of people in the public sector as they are on changes to technology and processes; the big challenge is to ensure that the Strategy delivers value in each of these areas."

The National Audit Office has commended the early progress being made by the Government in implementing its ICT Strategy but has identified areas where progress has not kept pace with the Government’s ambitions.

Launched six months ago, in March 2011, the Strategy is intended to tackle systemic problems in government ICT projects which in the past have tended to be too big, lengthy, risky and complex. Departments have independently developed systems which have often not communicated easily with one another. The broad aim of the Strategy is to reduce waste and project failure, create a common ICT infrastructure for government and use ICT to change how public services are delivered.

According to today’s report to Parliament, the Government has adopted a pragmatic and collaborative approach and has largely met the first round of deadlines for taking action. New arrangements are in place to implement the Strategy; and the leadership, governance and mechanisms for making sure departments comply with the Strategy are different from those in the past and have the potential to secure benefits. Thirty actions from the Strategy have been rationalized into 19 delivery areas with a more consistent plan about how the new approaches and standards and the common ICT infrastructure will be taken forward.

However, there are also a number of areas where not enough progress has been made. The Cabinet Office has not yet developed a system for measuring the extent to which the Strategy is resulting in sustained change. Government has also been managing the resources to implement the Strategy informally up to now and, without a clear resource plan, gaps may start to hinder progress. Gaps in ICT skills in the public sector also remain a serious challenge.