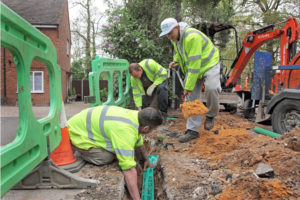 This report considers what the Superfast Broadband Programme has delivered and the lessons for government’s roll-out of nationwide gigabit broadband.

In 2010, government announced its aim for the UK to have the best superfast broadband network in Europe. It established the Superfast Broadband Programme (the Superfast Programme) to support broadband roll-out to areas which were not commercially viable. The Department for Digital, Culture, Media and Sport (the Department) allocated grant funding to local bodies (a local authority or group of local authorities, devolved governments or local economic partnerships). Local bodies would then provide additional funding and procure superfast broadband services for their areas. The Superfast Programme’s original target was for 90% of premises to have access to download speeds of at least 24 megabits per second by 2015. In June 2013, the Department revised its target to achieving 95% by 2017. These targets could only be met in conjunction with industry-funded roll-out.

Superfast broadband is fast enough for most household use today, but internet traffic is growing at around 40% each year driven largely by video streaming. In 2018, to meet future demands of consumers and businesses, government announced a new policy for the UK’s telecoms industry to provide gigabit-capable infrastructure to 50% of premises by 2025 and nationwide coverage by 2033. It has since committed to 2025 for nationwide coverage and has allocated £5 billion for its UK gigabit programme (the Future Programme), to subsidise roll-out to the most difficult to reach 20% of premises. The Department estimates that accelerating nationwide gigabit capability to 2025 will need government to subsidise roll-out of 20% of premises compared with only 10% for a 2033 timeline.

The report focuses on the role of the Department and considers:

The Department is still developing its plans for the Future Programme. It expects to let its first contracts in autumn 2021 and is currently awaiting approval of its outline business case. This report therefore does not examine the Department’s progress on the Future Programme in detail. Those that are digitally excluded out of choice or for financial or other reasons are also out of scope.

The Superfast Programme has extended the nation’s broadband connectivity and has delivered benefits, which the Department expects will continue to increase with time. Better broadband has helped communities across the nation to work and study from home and stay connected during the COVID-19 pandemic in ways that would not have been possible five years ago. However, in managing the trade-off between coverage and speed, the UK has a broadband network that is not fully future-proof and, less than a decade after launching its Superfast Programme, government has identified the need to upgrade it again.

Government has set a very challenging timeline in promising nationwide connectivity by 2025 and the experience from the Superfast Programme, as well as our previous work on major programmes demonstrates the importance of setting and publishing a realistic timetable and continuing to test whether this is achievable. The Department is working towards finalising its plans for its Future Programme to support nationwide gigabit coverage. In doing so, it must manage the tension between meeting a timeline and serving those in greatest need. Failure to do so risks leaving those left behind by the Superfast Programme even further behind and widening the rural divide. The Department still has much to do to mobilise and deliver a substantial programme. It has applied some learning from the Superfast Programme but it has moved away from some of its more successful aspects in a bid to meet its challenging timeline. As the Department develops its approach for the Future Programme it will need to show that it has considered how best to mitigate any new risks arising.