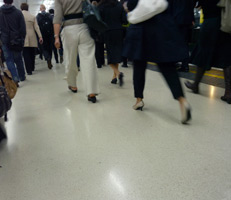 With projected demand falling and costs of carriages rising, there are risks to value for money from plans to increase capacity on the rail network.

"The Department for Transport used a broadly sound framework to develop plans for adding capacity to the rail network. These plans were developed in a stronger economic climate. However, we believe that it needs to implement these plans flexibly in light of current conditions, in order to protect value for money, and to be continually looking to drive down the costs of rail improvement works."

The Department for Transport’s latest plans for increasing rail capacity would not deliver as much extra capacity as originally specified, although the taxpayer would have provided nearly as much financial support (£1.2 billion over the period 2009-14) to train companies as originally envisaged, a report by the National Audit Office has revealed.

The report also points out that value for money is at risk because costs, particularly of rail carriages, have risen at the same time as the recession has reduced the Department’s projections of demand. Against this background, the Department has reviewed each individual scheme before entering into contract to ensure that it still offers value for money.

Capacity is now expected for 99,000 extra passengers into London in the morning peak (between 07:00 and 09:59), 15 per cent fewer than originally envisaged, and 25,500 extra passengers into other English cities, 33 per cent fewer. Passenger Transport Executives in the North of England – local government bodies responsible for the public transport in major cities – feel that their expectations for increased capacity in their area have not been met.

Demand for rail travel has increased significantly in recent years. An estimated 1.27 billion passenger journeys were made in 2008-09 compared to 0.74 billion in 1994-95. While capacity has also risen, crowding is widespread at peak times into major cities. For example, in 2008, nearly half of all passengers arrived at London between 08:00 and 08:59 on services that were either full or over-crowded. Other cities also experience high levels of crowding at the height of the morning peak.

The DfT published a thirty-year strategy in July 2007 when there was strong growth in rail travel and widespread crowding on commuter services. In the first five years (2009 to 2014) it aimed to handle 17 per cent more peak time passengers travelling into London and 27 per cent more into other major cities without increases in overall crowding.

The strategy set aside £9 billion for capacity increases. Within this, £7 billion was allocated to Network Rail. The Office of Rail Regulation (ORR) scrutinised Network Rail’s plans to meet capacity requirements and challenged and reduced costs. The level of cost detail available to ORR restricts its ability to judge the potential for Network Rail to increase efficiencies or to see whether efficiencies have been delivered.

Planning by the DfT concentrated heavily on securing extra carriages to meet forecast demand in the peak periods. By March 2010, the Department had secured use of 526 extra carriages, with a further 106 ordered and due to be ready for operation by 2012.