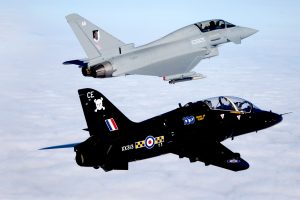 We investigated the performance of the MoD's military flying training system

The Ministry of Defence (the Department) is not currently meeting its stated targets for the number of trained aircrew it needs, with students taking longer to complete training than expected. In the next 10 years, it plans to invest £46 billion purchasing and supporting front-line aircraft for which it needs enough aircrew, such as pilots, observers and weapons specialists.

Students need to complete a three-phase training process. The Department currently provides Phase 2 through a range of providers including Ascent Flight Training (Management) Limited who it contracted in 2008 to design and introduce a new system – the  Military Flying Training System (MFTS). After delays, the MFTS has now largely been introduced. However, in 2015, the Department increased its aircrew requirements, compared to its previous requirement on which MFTS had been based. This led to a 29% (76) rise in students needing to complete training in 2018-19.

This investigation follows up recent Parliamentary concerns about the MFTS. It builds on our 2015 report by describing what has been delivered, while setting this within the broader context of the Department’s current aircrew requirements and its overall training system. It describes: