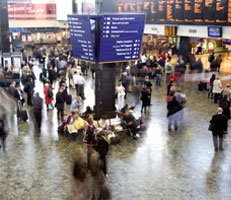 The competition to let this franchise lacked oversight. The full cost to the taxpayer is unknown, but likely to be significant.

"Cancelling a major rail franchise competition at such a late stage is a clear sign of serious problems. The result is likely to be a significant cost to the taxpayer. "The failure of essential safeguards raises questions about the Department's broader management approach, as well as this specific matter. "It is commendable that, once it uncovered the problems on the franchise, the Department sought to be open about what happened and to investigate further. Among the lessons to be learnt is that staff with line-management responsibilities should be clear that assurance processes are not a substitute for proper supervision and management controls."

The Department for Transport competition to let the Intercity West Coast franchise lacked management oversight and the governance of the project was confused, according to the National Audit Office. The spending watchdog has concluded that the full cost to the taxpayer is unknown but likely to be significant, with at least £1.9 million in staff and adviser costs, £2.7 million in legal costs and £4.3 million on external advisers for the reviews that it has commissioned.

The report identifies five essential safeguards against poor decision making in major projects. These are necessary to enable officials to assure Ministers and Parliament that decisions are sound and are value for money. However, in the case of the Intercity West Coast competition, none of these lines of defence operated effectively.

The refranchising process was a major endeavour, with considerable complexity and uncertainty. Nevertheless, the objectives of the Department for Transport were insufficiently clear during the franchise competition. The Department delayed the issuing of the invitation to tender by eight months because it had not finalized how it would implement recent policy changes, such as operators being responsible for stations. There was also confusion among Department staff about some aspects of the process.

The subordinated loan facility was a particular area of confusion. A subordinated loan is capital provided by the parent company which guarantees franchise payments will be made to the Department should the franchisee get less passenger revenue than expected. However, there were significant errors in the tool the Department used to calculate how big a loan it would require bidders to have. The model had been designed to inform internal discussions and received no extra quality assurance once the Department decided to use it to calculate the loan, a key commercial decision.

The competition lacked strong project management and there was no clear route for the project team to get approval for major issues in the project. No one person oversaw the whole process or could see patterns of emerging problems. In addition, there has been considerable turnover in senior positions in the Department. It has had four permanent secretaries in two years and changes of Directors General.