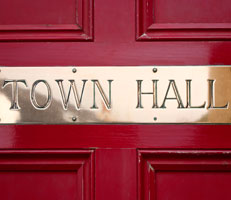 The NAO examines central government's approach to the funding of local authorities as they deal with reduced funding without reducing services.

"Local authorities are facing the challenge of reducing spending while protecting the services they provide. So far, they have generally coped well, but central government funding support will continue to reduce and the impact on individual local authorities will vary. "The Department will need to be able to detect emerging problems and respond flexibly and quickly"

The spending watchdog recommends that the Department for Communities and Local Government work with other government departments to improve the evaluation of the impact of decisions on local authority finances and services.

Local authorities have, so far, managed with reduced funding, but more are facing the challenge of avoiding financial difficulties while meeting their obligations. There is evidence that they are reducing services, for example, in adult social care and libraries.

Central government planned at the 2010 spending review to reduce funding of local authorities by £7.6 billion (26 per cent) in real terms between April 2011 and March 2015. The effects on local authorities vary. In 2012-13, the overall reduction in spending power ranges from 1.1 per cent to 8.8 per cent. In addition, changes to funding mechanisms will increase financial uncertainty and risk.

The NAO estimates that local authorities are planning to make £4.6 billion of savings by April 2013. It further estimates that they still need to find about half of the savings to be made before March 2015. At the same time, demand for high-cost services, such as adult and children’s social care, is increasing. The scope is diminishing for absorbing cost pressures through reducing other, lower cost, services given that spending on these services has already been reduced.

Departments have assessed the impact of changes to local authority funding, but their approach needs to be more comprehensive in the future. With a range of changes to local government funding being implemented over the spending review period, it becomes increasingly important to understand the cumulative effect of the changes.

The accountability framework for addressing widespread financial failure in local government is untested. Where there have been one-off failures requiring central government intervention, the failure regime has managed to resolve them. It is not known how the system would respond in the case of multiple financial failures in more challenging times for local authorities.