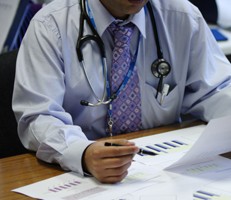 Hospital productivity has fallen over the last ten years. There have been significant increases in  funding and hospitals have used this to deliver against national priorities, but they need to provide more leadership, management and clinical engagement to optimise the use of additional resources and deliver value for money.

“Over the last ten years, there has been significant real growth in the resources going into the NHS, most of it funding higher staff pay and increases in headcount. The evidence shows that productivity in the same period has gone down, particularly in hospitals.”

Hospital productivity has fallen over the last ten years, according to the National Audit Office. Over the period since the ‘NHS Plan’ in 2000 there have been significant increases in hospital funding, to deliver improvements in the patient care, and designed in part to increase productivity. Hospitals have used their increased resources to deliver against national priorities, but they need to provide more leadership, management and clinical engagement to optimise the use of additional resources and deliver value for money.

The Department of Health has focused on delivering national priorities within a fixed budget and has achieved significant improvements in such areas as waiting times, healthcare associated infection rates, patient outcomes, reduced cancer mortality and the patient experience. However, the NHS pay contracts introduced since 2003 have increased costs but are not always used effectively by hospitals to drive productivity improvements. The annual measure by the Office for National Statistics shows a decline by an average of 0.2 per cent per year since 2000 in NHS overall productivity, with productivity in hospitals falling by around 1.4 per cent a year. Meanwhile, NHS expenditure increased by over two thirds in ten years.

The NHS announced in 2009 that, in response to the economic downturn and increasing demand for healthcare, it would need to deliver between £15 billion and £20 billion of efficiency savings per year by 2013-14. Around 40 per cent of these savings are expected to come from increasing efficiency in hospitals. Recent research indicates that the scale of these savings will require productivity gains of approximately six per cent per annum.

The ‘Payment by Results’ system of setting national tariffs has promoted some efficient practice, such as reductions in the length of time patients spend in hospital and more operations taking place as day cases. However, there is still substantial variation between hospitals: for example, in the money spent by hospital to provide the same treatment. If all hospitals performed at the level of the top 25 per cent in respect of staff costs, use of estate, control of emergency admissions and bed management, the NAO estimates that the NHS could save around £1.6 billion a year.Other initiatives to increase productivity, such as the ‘Productive Ward’ scheme, are not consistently or comprehensively used.

The Department has launched a national initiative (QIPP) to help the NHS deliver annual savings of up to £20 billion. There are risks to the delivery of the initiative, which is the responsibility of Strategic Health Authorities and Primary Care Trusts, whose focus may be distracted by the proposals for their closure by 2013.