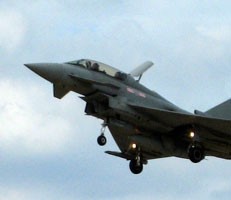 Management of the Typhoon Project

The cost of each Typhoon aircraft has risen by 75 per cent. While Typhoon performs some defence tasks now, it won’t take on all roles until 2018.

"The Typhoon is currently performing important operational tasks but the full multi-role capability won’t be available for a number of years. Until this happens the MOD will not have secured value for money from its over £20 billion investment in Typhoon. MOD has put some of the building blocks in place to enable this to happen. But difficult and deep-rooted problems remain to be overcome.

"Our examination has shown that key investment decisions were taken on an over-optimistic basis; the project suffered from corporate decisions to try to balance the defence budget; and the Department did not predict the substantial rate at which costs would rise. None of this suggests good cost control, a key determinant of value for money."

The Typhoon fighter aircraft is already fulfilling some key defence tasks but it is unlikely to reach its full potential as a multi-role aircraft until 2018, according to a National Audit Office report to Parliament. Getting full value for money from the significant investment in the project will depend on the MOD’s successfully progressing the delivery of multi-role capability so that the aircraft can be deployed when required and affordably.

The 2010 Strategic Defence and Security Review underlined how Typhoon is core to the RAF’s combat aircraft capability and emphasised the Government’s commitment to develop Typhoon into a fully multi-role aircraft which can conduct both air-to-air and ground attack missions. Typhoon already successfully undertakes air defence tasks and so far MOD has committed a total of £564 million to upgrade Typhoon for the ground attack role. However, it is unlikely to become the aircraft of choice for most ground attack missions until 2018.

The cost of the Typhoon project has risen substantially. Despite the MOD’s now buying 72 fewer aircraft (down from 232 to 160, a reduction of 30 per cent), the forecast development and production cost has risen by 20 per cent to £20.2 billion. This is a 75 per cent increase in the unit cost of each aircraft. The cost of supporting each aircraft has also risen by a third above that originally expected. The MOD now estimates that, by the time the aircraft leaves service, some £37 billion will have been spent.

Among the findings in today’s report are that key investment decisions were taken on an over-optimistic basis and costs have risen at a rate the MOD did not predict. The objectives of four partner nations on the project are not fully aligned and decision-making is slow. There have also been problems with spares and other support which mean the RAF is not flying Typhoon as much as planned.

There is the opportunity to secure increased value for money in future. The MOD has successfully put some of the building blocks in place to enable this. For example it has a better grasp of the cost of the Typhoon project. But there is more to do to improve the collaborative support arrangements, to develop a timely and cost effective way of upgrading the aircraft and to get greater certainty in long-term planning.