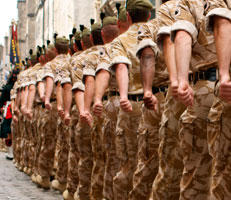 Managing change in the Defence workforce

The Ministry of Defence, under pressure to make rapid financial savings, is significantly reducing the size of its workforce, by over 54,000 personnel. A report today by the National Audit Office has found that these reductions are happening in advance of the Department’s fully understanding how it will operate with significantly fewer staff.

"The Ministry of Defence is in the difficult position of needing to maximize financial savings by cutting headcount before it has detailed plans for how it will operate in the future. The Department has acted decisively, but runs the risk that it will lose skills that it needs, worsening the current skills shortage. "A more targeted approach is needed to restructure the workforce and retain the skills that will be required in future."

The Ministry of Defence, under pressure to make rapid financial savings, is significantly reducing the size of its workforce, by over 54,000 personnel. A report today by the National Audit Office has found that these reductions are happening in advance of the Department’s fully understanding how it will operate with significantly fewer staff.

Today’s report points out that the MOD has acted decisively to put in place a redundancy programme which so far is running well. The Department’s approach to reducing its headcount has been largely in accordance with good practice and, up to now, it has acted in a way that is consistent with value for money. However, the urgent need for the Department to cut costs means it is having to cut its headcount in advance of planning in detail how it will operate in the future, thereby risking making current skills shortages worse.

The Department plans to cut its civilian workforce by 29,000 and its armed forces by 25,000. To meet these targets, the MOD has started a redundancy programme and a Voluntary Early Release Scheme, both of which run in several tranches. The most recent estimates by the Department are that the process will cost £0.9 billion and produce £4.1 billion in cost reductions (just over £3 billion net).

The potential savings fluctuate with the timing of the redundancy tranches (a delay of three months to the second military tranche has reduced savings from this tranche alone by an estimated £100 million to £138 million to 2015). The Department now has to reduce the numbers in the Army by a further 5,000 by 2015 but has not worked out in detail how it will do this. Delays to the process erode the level of potential savings as the Department continues to pay salaries, benefits and contributions to pensions.

The MOD will need to make profound changes to how it works in order to continue with its current level of activity with fewer staff. But the NAO has not, so far, seen enough detail to determine whether the Department is making sufficiently substantial changes to how it works. Without real changes to ways of working, cutting headcount is likely to result in the Department’s doing less with fewer people or, alternatively, trying to do the same with greater risk.

The significant reduction in headcount also creates a risk that current skills gaps will worsen. The MOD is continuing to recruit albeit at significantly lower levels. But, because recruitment, particularly in the military, tends to bring in younger people, the Department will struggle to maintain skills levels. It has taken some steps to retain critical skills, but there is still a risk that some of the skills it needs now and in the future may be lost.