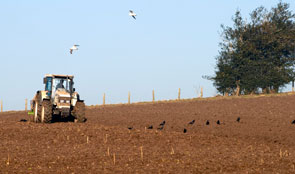 Since 2005, the Department for Environment, Food and Rural Affairs has incurred a total of £642 million in financial penalties relating to the Common Agricultural Policy (CAP) in England.

“Progress has been made by Defra over the last year in its approach to managing the financial penalties imposed by the European Commission. Nevertheless, the problems giving rise to financial penalties are persisting and there are additional risks arising from the more complex CAP 2015-20 scheme. I am sorry that I have had to return to qualifying my opinion on regularity on the Department’s accounts, primarily owing to the fact that penalties for 2012 and 2013 have now been confirmed.”

Since 2005, the Department for Environment, Food and Rural Affairs has incurred a total of £642 million in financial penalties relating to the Common Agricultural Policy (CAP) in England, according to a report Managing disallowance risk published today by the National Audit Office. These penalties are imposed by the European Commission when it believes member states have not complied with its requirements to control and administer payments properly under the CAP.

The UK has incurred ‘disallowance penalties’ of £2.70 for every £100 of CAP funds paid out to the UK from the European Commission since 2005. Over the period this represents the sixth highest figure in Europe out of 28 member states. The countries with higher rates of penalties are Greece, Romania, Portugal, Bulgaria and Cyprus.

The main causes of ‘disallowance penalties’ in the UK under the previous CAP scheme (which ran from 2005 to 2014), were late payment to farmers, poor mapping data used to verify applications, and shortcomings in cross-compliance controls.

Issues with the quality and completeness of data in the Rural Land Register are a key contributor to the disallowance penalties. The Department is considering a range of remedies that are likely to require an investment of between £25 million and £45 million. If it can successfully tackle all sources of mapping related disallowance, the Department believes it could avoid future penalties in England of between £215 million and £370 million by 2021.

As well as dealing with historic issues, the Department and the Rural Payments Agency (RPA) are making significant changes in response to the new 2015-20 CAP scheme.

The current 2015-20 CAP scheme is more complex than the one it replaces, despite efforts to achieve simplification. The Department estimates that the reformed CAP will be 15% more expensive to deliver than the old scheme. The Department and the RPA expect increased disallowance in the early years of the new scheme because of the added complexity and the European Commission’s introduction of more stringent controls.

As part of its reform agenda, the Department has launched the CAP Delivery Programme, to deliver a new IT system for processing grant claims and payments in England. The programme is behind schedule and the Department has had to make changes to the system. In March 2015, because of technical problems, the Department and RPA decided to suspend the system which enabled famers to submit their personal details and land data online, and reverted to a partially paper-based system to ensure registrations could be submitted on time. This increases the risk of errors, and will delay savings that had been anticipated from not having to input data manually. Future levels of disallowance are highly dependent on the final design of the system and the extent of any further delays in implementation.

At the same time as publishing his report on managing disallowance risk, the head of the NAO, Comptroller and Auditor General Amyas Morse, has also published his reports on the Defra and RPA accounts for 2014-15. RPA is the main delivery body for CAP in England but the payments and related disallowance penalties are recorded in the Defra accounts. The C&AG has qualified his opinion on the Defra financial statements on the ground that the value of the financial penalties confirmed in 2014-15, £90 million, was both material in relation to total departmental expenditure and irregular. The C&AG had not qualified his audit opinion on regularity for 2012-13 and 2013-14 because he judged that the penalties confirmed in-year were not material. However, before that, the C&AG had for several years qualified his audit opinion on regularity – again, as a result of material financial penalties incurred by the Department.