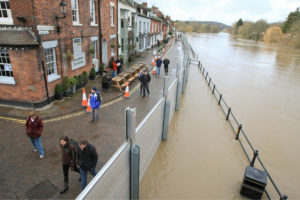 This report evaluates whether government’s approach to managing the risks of flooding and coastal erosion is achieving value for money.

Flooding and coastal erosion put lives, livelihoods and people’s well-being at risk. The Environment Agency (EA) estimates that 5.2 million homes and businesses in England are at risk of flooding and that around 700 properties are vulnerable to coastal erosion over the next 20 years. In addition, more than two thirds of properties in England are served by infrastructure sites and networks located in (or dependent on others in) areas at risk of flooding. The Met Office’s UK climate projections show more extreme weather events and sea level rises resulting from climate change. This, when combined with increased housing development, will heighten flooding and coastal erosion risks.

The EA was set a target to provide better protection for 300,000 homes through its investment from 2015 to 2021. In July 2020, the government issued a ministerial policy statement setting out its priority to create a more resilient nation to meet the challenges of flooding and coastal erosion. This replaced the previous statement, which was published in 2009. Alongside it, EA laid its new strategy in Parliament, which was then published in September 2020. It sets out the vision for “a nation ready for, and resilient to, flooding and coastal change – today, tomorrow and to the year 2100”, and supersedes the previous strategy published in 2011.

This report evaluates whether government’s approach to managing the risks of flooding and coastal erosion is achieving value for money in three parts:

Between 2015 and 2021, government will have invested £2.6 billion in flood defences. EA is on track to meet government’s aim to better protect 300,000 homes, has secured more than £500 million of partnership funding to supplement the programme and expects to achieve an estimated benefit–cost ratio across the programme of 8:1 over this period. However, Defra’s narrow focus on the homes better protected target has not necessarily produced the best return on investment and does not represent the full picture. As we approach the end of the current investment period, government does not have a comprehensive measure to demonstrate whether the overall level of flood risk in England is lower now than it was at the start of the programme.

Over the next six-year period starting in April 2021, government’s capital investment is set to increase substantially to £5.6 billion, with the aim of providing better protection for 336,000 properties and the expectation that the programme will reduce overall flood risk by up to 11%. While the new policy statement and EA strategy are an important step forward, with the new investment period about to begin, Defra has yet to provide full details of what it aims to achieve from the programme, how the programme will be managed and what indicators it will use to measure progress. Unless it develops these, alongside a more robust measure of its progress in reducing flood risk, Defra will not be able to demonstrate convincingly to Parliament that future investment is achieving value for money.