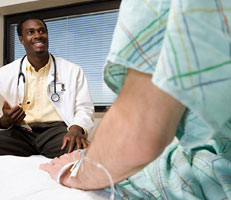 The 2003 contract for hospital consultants delivered many expected benefits, but there is room for improvement in how trusts manage their consultants.

"NHS consultants play a key role in the NHS. Given the size of the pay increase given to consultants under the 2003 contract, it is reasonable to expect Trusts to have made more progress in improving how consultants are managed and realizing the expected benefits of the contract." "Trusts need to get consultants strongly involved in achieving the trusts' objectives as well as their own clinical goals."

A new contract for hospital consultants, introduced in October 2003, delivered many of the expected benefits. This was in exchange for a significant increase in consultants’ pay. According to the National Audit Office, there is still significant room for improvement in how trusts manage their consultants.

Of the expected benefits that could be measured, all have been either fully or partly achieved. Consultants’ private practice work has not increased, pay progression has slowed and 97 per cent now have a job plan setting out their objectives, although 16 per cent of these have not been reviewed in the last 12 months. While indicators show that consultant productivity has continued to fall, the rate of decline has slowed significantly. The consultant participation rate (the ratio of full-time equivalent consultants to headcount) has also increased although it remains unclear to what extent this has resulted in consultants doing more actual work for the NHS.

More could be done to achieve better value for money, by fully realising the benefits set out in the Department’s business case. Despite, for example, the contract providing a clear structure for paying for additional work at contractual rates, most trusts still use locally agreed rates of pay for additional work outside job plans, which ranges from £48 to £200 per hour. Pay progression is also the norm and not linked to consultant performance.

Realizing the contract’s benefits depends on how well individual NHS trusts manage consultants: for example, through effective job planning to improve the management of their time. There are examples of trusts adopting good management practice; however, more improvement can be made. According to an NAO survey, only 41 per cent of consultants thought that their trust motivated them to achieve the trust’s objectives. While most trusts monitor consultant performance, only 43 per cent of trusts (27 per cent of consultants) thought that information was good enough to assess individual consultant performance. Trusts also reported that nearly a fifth of consultants have not had an appraisal in the last 12 months. Many trusts are not implementing the good practice job planning guidance published jointly by NHS Employers and the British Medical