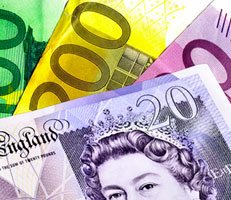 National Audit Office report: Managing the impact of changes in the value of the euro on EU funds

More could be done to manage the risk of a reduction in the value of EU funds to the UK in the event of a depreciation in the euro.

"While the UK has had some success in reducing the risk to the taxpayer of exchange rate movements, the current arrangement whereby each department managing an EU Fund develops a foreign exchange policy in isolation is not cost-effective." “More detailed guidance from the Treasury and a more coordinated approach could improve foreign exchange management, and reduce costs and risk to taxpayers.”

More could be done to manage the risk of a reduction in the value of EU funds to the UK in the event of a depreciation in the euro, the National Audit Office said today.

The UK Government receives around £5 billion from the European Union each year to fund EU programmes in the UK. However, the relative value of the pound and the euro varies significantly, with the exchange rate fluctuating by up to 14 per cent in a single month. A 14 per cent change can lead to an increase or decrease of £700 million in the sterling value of funds provided by the EU if the exchange rate holds at that level.

The use of forward contracts (a form of hedging where the department and a commercial bank agree an exchange rate in advance) has helped reduce the potential funds exposed to a fall in value from £8.5 billion to £2.4 billion in 2009-10. However wider use of hedging could reduce still further the amount of taxpayer funds at risk. The Department for Work and Pensions and the Department for Communities and Local Government, which do not hedge, need to review their foreign exchange management policies and learn from the Department for Environment, Food and Rural Affairs which does. CLG and DWP are exposed to losses of around £150 million per ten per cent incremental depreciation of the euro, but the UK can benefit by only around £20 million from each equivalent appreciation.

Each department managing EU funds works in isolation on developing its policy. Such an arrangement is not cost effective. These departments would benefit from more detailed guidance from HM Treasury in this area, and from developing more pooled expertise to reduce duplication of effort.

Today’s report points out that government bodies require considerable expertise and support to ensure the most appropriate and cost-effective hedging arrangements are put in place. While the Rural Payments Agency has protected the UK exchequer from volatility in the value of EU funds available to reimburse UK payments, the arrangements have cost some £69 million more than they might. Some £29 million arose from administrative error with the remainder the result of forecasting hedging requirements being out by around 3 per cent.