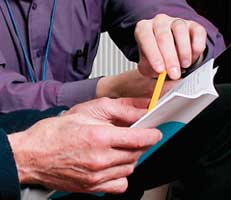 It will be difficult for government departments to achieve value for money from means-tested benefits unless government understands the impacts of means testing, learns from past experience and improves coordination between different benefits.

"As government prepares for the introduction of major proposed reforms in several programmes, it is vital that departments seek to understand some of the impacts of means testing that we have identified. They must then share this knowledge in order to learn from past experiences, so that risk to the taxpayer is minimized and benefits get to those who need them."

It will be difficult for government departments to achieve value for money from means-tested benefits unless government understands the impacts of means testing, learns from past experience and improves coordination between different benefits, the National Audit Office has reported today.

It is clear that means testing will be used extensively for the foreseeable future as it helps target state support at the people that need it most, but it can have many other important consequences. For example, there can be disincentives for recipients of means-tested benefits to return to work. Means testing also makes the administration of benefits more complex and is associated with higher costs as well as increased rates of fraud and error.

In light of proposed and ongoing reforms to benefits and related programmes, the NAO notes the importance of departments sharing good practice and learning from past experiences in the design of means tests. For example, HM Revenue and Customs has struggled in the past with unexpectedly large overpayments of tax credits (£9 billion between 2003-04 and 2009-10) because of the way that payments are determined under the legislation. In spite of changes to the design of tax credits, overpayments continue to be significant.

Departments do not systematically consider or measure all of the impacts of means testing: for example, the burden on claimants, such as difficulty with completing forms and the cost of requesting advice. Issues associated with means testing, such as incorrect declarations of earnings and errors by officials in calculating entitlements, accounted for over half of all fraud and error in benefits and tax credits.

There is a lack of coordination of, and overall accountability for, means testing across government. Departments are responsible for their own means-tested benefits and their impacts, but because means-tested benefits interact with each other it is important that there is coordination. For example, no one body has responsibility for looking at how the impact of university fees will be influenced by wider means testing. This is important as some households could be financially worse off if they work more and their child is no longer eligible for a bursary to help towards tuition fees.