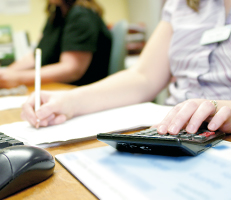 Minimising the cost of administrative errors in the benefit system

DWP has not reduced the mistakes made by staff processing benefits. In 2009-10 it overpaid an estimated £1.1 billion and made underpayments of £500 million. However, the scale of the challenge facing the Department should not be underestimated.

"The Department is clearly committed to reducing the cost of administrative error and it is frustrating that there has been no discernible reduction since 2007. Progress will depend on developing a better understanding of the costs and benefits of different interventions, so that they can be targeted more effectively and are able to achieve a significant reduction in the cost of administrative error."

A report today by the NAO has highlighted that the Department for Work and Pensions has not reduced the mistakes made by its staff in processing benefits. In 2009-10, it overpaid its customers by an estimated £1.1 billion and made underpayments of £500 million.

However, the scale of the challenge faced by the Department should not be underestimated. The benefits system is large, encompassing over 27 different benefits and a total caseload of around 20 million people. The scale of this task increases further when changes in family circumstances and financial conditions are also taken into account. Mistakes occur when processing such a large volume of payments.

In addition, the Department has had to respond to the recent recession in which Jobseekers Allowance caseload almost doubled between 2008 and 2009. To date there does not appear to any discernible deterioration in performance, which may represent progress.

The report notes that the Government’s recent announcement of the introduction of Universal Credit is an opportunity to simplify many of the regulations, but such changes will take a long time to implement. In the meantime, the onus remains on the Department to keep the costs of mistakes to a minimum.

The Department has demonstrated a clear commitment to reducing administrative error, through the publication of a strategy in 2007 aimed at tackling mistakes made by its staff and through the formation of dedicated departmental-wide groups such as the Fraud and Error Council which reports direct to the Permanent Secretary.

There is, however, scope for improvement in the quality of information used to assess where the Department should focus its efforts. Although DWP has initiated an exercise to understand fully the causes of error, this will not be complete until the spring of 2011. There is also scope for further work in collecting and analysing the full costs and benefits of the Department’s interventions in order to assess cost effectiveness.

The Government announced a new strategy in October 2010 with a greater emphasis on preventing errors from arising and this is now an opportunity for lessons to be learned.