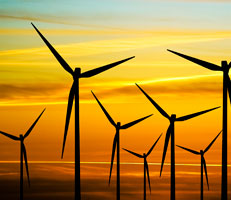 Using competition to award companies licences to transmit electricity from offshore wind farms has benefits but consumers might end up bearing the cost of inflation.

"These new deals bring the benefit of competition but lock consumers into 20-year deals to pay prices increasing each year with inflation, whether the assets are used or not. "Competition brings pressure to bear on the levels of those prices, but the terms of future deals will have to be refined to make sure consumers get best value in return for these long-term commitments."

The National Audit Office has highlighted the benefits flowing from the innovative use of competition to award companies licences to transmit electricity from offshore wind farms – but warns that electricity consumers are being left with some significant risks, including bearing the cost of inflation.

The Government has a target that, by 2020, 15 per cent of the UK’s energy will come from renewable sources. The Department for Energy and Climate Change estimates that offshore wind farms could by 2020 be contributing between 8 per cent and 15 per cent of electricity to help meet this target. Based on Government forecasts to 2020, investment of around £8 billion will be needed to connect the offshore sites to the onshore grid.

Today’s NAO report is an early examination of the new model, developed by the Department and the Gas and Electricity Markets Authority, for using competition to license the transmission of electricity from offshore wind farms to the onshore network.  The spending watchdog concludes that the licensing model has already delivered benefits and has the potential to deliver more. There were good levels of interest in the first four licences, despite financial market volatility, with competition holding down prices in these deals which were for assets worth a total of £254 million.

In establishing this new market, however, the Authority guaranteed the licensees a 20-year inflation-proof income. This may help to attract interest from long-term investors, such as pensions and infrastructure funds seeking protection from inflation risk. But it also protects licensees and generators of offshore electricity from reductions in usage of the transmission assets and leaves consumers with long-term inflation risk.

In addition, transaction costs have been high and the extent of savings from the new arrangements is not clear cut. Further work is also needed to establish robust benchmarks to ensure the amounts paid for transmission construction costs are not excessive.

For the initial four competitions, costs of debt were 2.1 per cent to 2.2 per cent above the relevant rates offered by 15-year UK gilt yields. The NAO considers this represented a competitive deal for licensees in the prevailing banking environment. But the NAO highlights the scope for improving financing costs and notes that there is no provision for claw-back in the event of refinancing gains.