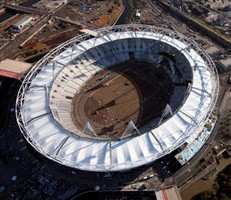 The preparations for the 2012 Olympic and Paralympic Games are going well overall and, despite time pressures, the Olympic Delivery Authority remains on course to deliver its construction programme.

"Good progress is being made in the preparations for the 2012 London Games which will begin in 17 months. All construction and infrastructure projects are forecast to be completed on time, albeit in two cases with little room to spare before the deadline for handover to LOCOG, the Games organizer, and operational planning has improved. “However, the final cost of the Games to the taxpayer is inherently uncertain and as the Games near there will be less flexibility to make savings in response to any unforeseen financial pressures."

The preparations for the 2012 Olympic and Paralympic Games are going well overall and, despite time pressures, the Olympic Delivery Authority remains on course to deliver its construction programme.

According to today’s report, the fifth such NAO report on preparations for the 2012 Games, five of the 24 main projects being undertaken by the Olympic Delivery Authority have now been completed ready for handover, and on current projections, the remaining projects will be delivered on time. However, the timings on the Aquatics Centre and two elements of the Athletes’ Village are becoming tight for handover to the London Organising Committee of the Olympic and Paralympic Games (LOCOG) in July 2011 and January 2012. Progress with the complex operational planning required for Games time has also been strengthened since the NAO last reported.

The overall cost to the public purse of security during the Games has increased from £600 million to £757 million. This is mainly because the government has now agreed to provide £282 million from the £9.3 billion Public Sector Funding Package for work to secure the perimeter of the Olympic Park and venues during the Games, offset by expenditure on wider security and policing which is now forecast to be £125 million less than it was in March 2007. In its previous report the NAO had highlighted the need to finalise the costs and funding responsibilities for venue security.

The final cost of the Games is inherently uncertain. While the responsibility for important areas of cost (such as venue security) has been resolved, £498 million of new scope has been added and there is now less contingency available to manage risk. Of the original £2,747 million contingency in the Public Sector Funding Package, £974 million remains. With almost 80 per cent of the Olympic Delivery Authority’s construction programme complete and all known areas of uncertainty resolved, risks have been reduced. However, as there can be no guarantee that the remaining contingency will be sufficient to cover further unknown risks to the Games, the Government Olympic Executive should have plans for how it will meet any requirement for extra funding which cannot be met from within the remaining contingency.

Progress has been made in firming up the finances of LOCOG. However, as guarantor the Government has always been financially exposed if LOCOG does not break even. As LOCOG’s contingency is unlikely to cover the costs of all potential risks between now and the conclusion of the Games, its risks and contingency will need careful management. If LOCOG did not break even, public funding for LOCOG would be required.

Today’s report also highlights that, regarding the legacy of the Games, while the Government Olympic Executive is accountable for the success of the legacy and has set out the four strands of its work, it has not yet estimated the net benefits it expects to accrue to the UK which can be directly attributed to the Games. We recommend that it should do so.