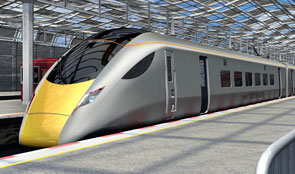 “At the moment there is a gap between the Department's stated desire to play only a strategic role in the rail industry and how it is acting. It needs to ensure that the industry understands its policy on the procurement of trains and produce a detailed integrated plan bringing together infrastructure, rolling stock and franchising strategy.”

The Department for Transport signed contracts for two large procurements of rolling stock – for Thameslink and Intercity Express – in line with broad objectives. These include reducing the long-term costs to the whole rail system and improving the reliability and availability of trains by transferring risks to the train service suppliers as well as increasing capacity to accommodate predicted increases in demand. But the National Audit Office will not be able to conclude fully on the value for money of either project until the new trains are in service.

The Department’s objectives were designed in part to minimize the effects of long-standing issues in the rail industry. These issues and the scale of the procurements led to the Department’s decision to lead the procurements itself, despite not having led a major rolling stock procurement before. However, there is still a lack of incentives for train operators to consider long term, whole system costs more generally, such as maintenance costs for tracks, although the Department has begun working with industry to resolve such issues.

Today’s report also highlights that the Department was departing from its stated policy of leaving train procurements to the industry, particularly following its decision in July 2013 to exercise an option in the original contract with Agility Trains to add 270 carriages to its Intercity Express order at a cost of £1.4 billion. This has created confusion in parts of the industry about the Department’s role.

The Department estimates that future payments will be around £7.65 billion for InterCity Express over 27.5 years and £2.8 billion for Thameslink over 20 years. Contracts include the cost of the trains themselves as well as the cost of maintenance and of depots. The Department also has the opportunity to gain from future reductions in the cost of financing both procurements.

Today’s report points out that both procurements achieved levels of competition equivalent to or better than other rolling stock procurements since 2000. However, in the case of Intercity Express, the Department decided to proceed with a revised bid without rerunning the competition. The Department view is that no other manufacturer could offer better value for money but this remains untested.

Just two years after the Intercity Express procurement began, the Department decided to electrify the Great Western Mainline which meant that diesel trains were no longer needed. While the programme was designed to be flexible enough to accommodate this change of direction, the NAO recommends that the Department in future major procurements produce a detailed, integrated plan to bring together infrastructure, rolling stock and franchising strategy.

The Department awarded both contracts more than two and a half years later than intended, largely because of pauses to the procurements and the challenge of securing finance for these projects during the financial crises.