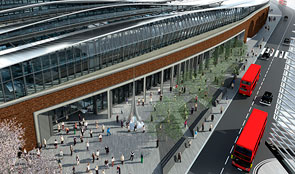 Progress in delivering the Thameslink programme

Thameslink aims to reduce overcrowding and journey times. Initial progress has been good but a 3 year delay in awarding the train contract puts the 2018 programme deadline at risk.

"It’s too early in the Thameslink programme to conclude on whether or not it will achieve value for money. That will have to wait until the new service is running. However, there has been good progress in delivering the first stage of the infrastructure part of the programme on time and under budget, which the Department now needs to build on. Our principal concern is around the delay in agreeing the contract to build new trains which raises questions about the feasibility of delivering the whole Programme by 2018.”

The Department for Transport has done well so far to contain the infrastructure costs for the Thameslink Programme within the original budget, according to an examination of the progress being made to increase passenger capacity on the rail route through central London. Phase one of the Programme cost £1.704 billion, was completed on time and was £143 million under budget.

However, delays of more than three years in agreeing the contract to buy new trains mean that delivering value for money from the Programme as a whole is at greater risk than the National Audit Office would have expected at this stage.

According to today’s report, there continues to be a robust transport case for the £3.552 billion (at 2006 prices) Programme. Thameslink services have consistently been among the most crowded London routes with passengers amongst the least satisfied with space on trains; and demand is forecast to increase. The Department estimates that the Programme will make net present benefits of £2.9 billion through reduced journey times, reduced overcrowding on trains and quicker interchanges between services.

The Department needs to manage a complex interaction between completing the infrastructure project; buying new trains; and letting a new franchise. Delays to any of these projects can delay significantly or complicate delivery of other parts of the Programme. The award of the estimated £1.6 billion contract to buy new trains is currently delayed by over three years and this has implications for the rest of the programme and also plans for electrification of other parts of the rail network.

The delay raises questions about whether the Department underestimated the scale of the work, time and skills and resources it needed to negotiate a PFI deal of this complexity. And until the contract is let it will not be clear whether delivery of the whole Programme by 2018 is still feasible.

As work begins on phase two of the Programme, the Department needs to ensure it has the necessary capacity and skills to keep it on course alongside other rail projects it manages, such as Crossrail and High Speed 2.