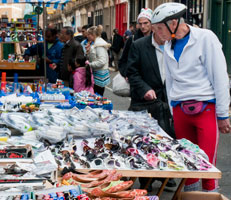 Unfair treatment of consumers, ranging from pressure selling to systematic scams by criminals, is costing billions of pounds each year – but the system for enforcing consumer law is not delivering value for money.

“Consumers in this country believe that they are well-protected but the reality does not support this view. The system for enforcing consumer law is fragmented and significantly underequipped to tackle a whole range of serious consumer scams.”

Unfair treatment of consumers, ranging from pressure selling to systematic scams by criminals, is costing billions of pounds each year – but the system for enforcing consumer law is not delivering value for money. According to today’s report by the National Audit Office, the overall scale of this so-called ‘consumer detriment’, particularly that caused by doorstep crime, is not being properly evaluated, leading to the inefficient allocation of resources.

Although much detriment occurs at the regional and national level, incentives are weighted against a coordinated approach which goes beyond local areas. While there are no reliable figures, NAO estimates the cost of detriment which cannot be tackled at local level is more than £4.8 billion each year.

The governance arrangements for the consumer law enforcement system are not clear, as demonstrated by the development of two separate and incompatible databases, one by the Office of Fair Trading and an alternative by one Trading Standards region. Central government provides annual funding of £34 million to tackle crime which crosses the borders between local authorities, but this is relatively low compared to the scale of the problem.

While some larger Trading Standards Services do take on substantial cross-border cases, there is a risk that projected reductions in resourcing will reduce their willingness to do so. The Department for Business, Innovation and Skills estimates that the annual funding for Trading Standards Services will reduce from its current level of £213 million to about £140 million-£170 million by 2014.

The framework for prioritizing and allocating cases, introduced by the Office of Fair Trading, is not being applied as intended. While it has brought consistency in deciding which types of cases should be resourced and demonstrates learning between different enforcement agencies, formal structures for supporting the model are not in place in seven of the eleven regions, and there is still a lack of clarity over who should be taking cases forward. As a result, the OFT has been able to take enforcement action on only two of the 15 cases referred to it in the last two years.