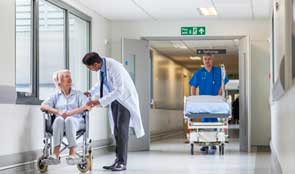 Recovering the cost of NHS treatment for overseas visitors

The amount recovered has increased but NHS hospital trusts remain some way from complying in full with the requirement to recover the cost of treating overseas visitors.

“Hospital trusts remain some way from complying in full with the requirement to charge and recover the cost of treating overseas visitors. In the past two years, the amounts charged and amounts actually recovered have increased. Much of this increase is the result of changes to the charging rules. “If current trends continue and the charging rules remain the same, the Department will not achieve its ambition of recovering up to £500 million of overseas visitor income a year by 2017-18 and faces a potential shortfall in the region of £150 million.”

The National Audit Office has found that the Department of Health and the NHS, working with other parts of government, have made progress to recover more of the cost of treating overseas visitors who are not entitled to free hospital treatment but, if current trends continue and the charging rules remain the same, will not achieve the government’s ambition of recovering up to £500 million a year by 2017-18.

In light of concern that the NHS was “overly generous” to overseas visitors, in 2014 the Department launched a programme intended to extend the scope of charging and implement the existing regulations more effectively. Increasing overseas visitor income is one of several measures intended to help improve the financial position of the NHS. The ambition to recover up to £500 million a year represents a substantial increase on the estimated £73 million recovered in 2012-13. Current trends and data indicate that, within the existing cost recovery rules, the amount charged is forecast to be £346 million in 2017-18.

The Department’s management of the cost recovery programme demonstrates many elements of good practice, and it has taken action to help trusts identify chargeable patients more easily and to secure the engagement of NHS staff. The charging regulations are complex, however, and trust staff may have to rely on judgement in determining whether a patient is chargeable, sometimes with limited information.

Today’s report found significant variation in the amount of overseas visitor income that trusts identify, suggesting scope for improvement. According to the NAO, the Department does not have a good understanding of why some trusts do better than others. In 2015-16, just ten trusts, all in London, accounted for half of the total amount charged to visitors from outside the EEA. The number of overseas patients treated is affected by the location and size of the trust, and the cost for each patient varies depending on the nature and complexity of treatment provided. It is difficult to say, however, how much money any trust should be charging because limited data are available to predict how many overseas visitors each trust might expect to treat.

Trusts face a particular challenge in recovering the cost of treating patients who are personally liable for the cost of their treatment, mainly visitors from outside the EEA. It is not possible to calculate a precise debt recovery rate by comparing the amounts charged and recovered in the same year. However, to give an indication, we used the available data to estimate that trusts recover around half of the amounts they charge directly to patients, mainly visitors from outside the EEA. Three-quarters of trusts (37 out of 50) who responded to the NAO’s consultation said that overseas visitor debts were a very important or a fairly important problem for their trust.

Most of the increase in income, £164 million in 2015-16, has come from a new immigration health surcharge that was introduced by the Home Office in April 2015. The surcharge is payable by most students and temporary migrants from outside the EEA. It is a new source of income for the health system because it extends the scope of charging to people who were previously eligible for free treatment. In addition, the amount that trusts invoiced to patients directly – mostly visitors from outside the EEA – was 53% higher in 2015-16 than in 2013-14. This increase is likely to be mainly due to a change in the charging rules that allowed trusts to charge higher prices. Amounts charged to patients from within the EEA increased slightly, but remain well below the ambition that the Department set in 2014.