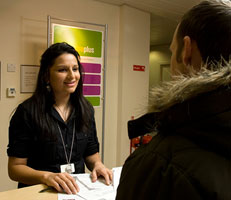 Responding to change in jobcentres

The jobcentre network has coped well in the economic downturn, but must improve performance measures if it is to support claimants effectively.

"The jobcentre network is a well-established operation and has shown its capacity to maintain services during a downturn. The Department can handle changes without major problems in performance or escalating costs. This represents value for money. "The Department must, however, improve how it understands performance, if it is to support claimants effectively. Simply measuring how many people end their claims for benefits does not reveal the true impact of jobcentre services."

The Department for Work and Pensions’ network of jobcentres has coped well in the face of the economic downturn, according to a report today by the National Audit Office. The Department has continued to develop these services in the face of major reforms, but it must improve how it tracks and understands performance.

Despite having limited numbers of staff, jobcentres coped with a rapid rise in claimants after the start of the downturn. In six months (between September 2008 and March 2009), Jobseeker’s Allowance claimant numbers increased by two-thirds (from 0.9 million to 1.5 million). The Department relaxed requirements about the activities that jobcentre staff needed to undertake during 2008-09 and 2009-10, which meant jobcentres were able to prioritize checking eligibility for benefits and making sure claimants were paid.

However, the NAO found that, although the Department has continued to pursue efficiency, variations in case load across jobcentres suggest further gains may be possible. The average Jobseeker’s Allowance caseload per adviser in 2011-12 was 168, but varies by nearly 30 per cent across jobcentre districts.

The Department has simplified its performance measures and now primarily targets the move by claimants away from benefits, or ‘off-flow’, as a simple and intuitive measure of performance. However, this gives no information about how individual jobcentres perform in supporting claimants to work. Some may have found work but, in 40 per cent of cases, the reason for moving off benefits is not recorded. Claimants may have moved onto other benefits, been imprisoned or ceased claiming without taking up work.

A separate survey carried out by the Department estimated that 68 per cent of off-flow from benefit is into work. The Department has yet to decide how to adapt off-flow measures after the introduction of Universal Credit, which merges out-of-work and in-work benefits.

The need to understand performance has been increased by the Department’s move away from nationally mandated processes towards encouraging jobcentre staff to tailor support for claimants. Personal advisers are encouraged to vary the nature of their support, for example by using phone, text messaging and email as well as face to face meetings with claimants. There is also flexibility on the length, timing, staffing and number of work-focused interviews.

While flexibility encourages local innovation, the Department needs to broaden its evaluation of new approaches and improve performance measures if greater flexibility is to lead to better services.