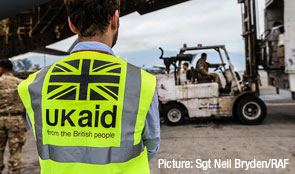 The Department for International Development’s spending on humanitarian interventions has almost trebled between 2010-11 and 2014-15 to more than £1 billion per year, rising as a share of its total budget from 6% to 14%.

“The Department for International Development is choosing to take action in an increasing number of crises in complex and dynamic environments, and is spending over £1 billion a year in doing so. Interventions of this type can last for several years and our international experience suggests that it is ‘easier to get in than get out’. It follows that this type of crisis action is likely to represent an increasing proportion of DFID’s budget, assuming that interventions continue to be initiated at the same rate as they have been.”

The Department for International Development’s spending on humanitarian interventions has almost trebled between 2010-11 and 2014-15 to more than £1 billion per year, rising as a share of its total budget from 6% to 14%, according to today’s report from the National Audit Office. Much of the increase has been accounted for by the Department’s recent interventions in the Middle East and other countries where it did not have established development programmes, as well as its response to the Ebola outbreak in Sierra Leone.

The NAO’s report focuses on the Department’s overall approach to responding to crises, drawing on five individual responses: Syria, Yemen, Nepal, the Horn of Africa, and Sierra Leone. Securing value for money in the context of responding to crises in complex and dynamic environments is inherently challenging for the Department. The NAO finds that the Department is well positioned to identify and then respond quickly to sudden onset crises, and has established longer-term interventions for the more stable protracted crises, making it well placed to achieve value for money in those cases.  The Department’s management of its more fluid and protracted crises, however, has yet to reach a similar level of maturity.

While the Department has criteria which help it decide how to respond to sudden-onset crises, it does not have an overall policy framework for prioritising its intervention on crises which are protracted. In addition, the Department does not have a comprehensive set of principles which underpin whether, when and how to exit from crises. Of the 33 crises that the Department has responded to since 2011, it has designed programmes to support continuing involvement in 22. DFID needs to understand in greater detail what impact its crises interventions have on other areas of its business.
Today’s report finds that the Department has increased the attention it gives to building resilience to crises, and has faced challenges putting in place a sustained response to complex crises where it did not have a local presence.

According to the NAO, the Department has yet to identify whether it is deploying the most cost-effective combination of internal and external resources and skills. It spends around £6 million a year on contract staff, who have been invaluable in its responses in Syria, Nepal, Yemen and Sierra Leone. Contractors provide access to expertise that the Department’s own staff do not have but they can also be expensive when deployed for long periods.

The Department drafted in 164 staff from across the organisation to support its successful response to the Ebola outbreak. The Department’s response was dependent on the goodwill of these staff, and the teams from which they came. There were, however, weaknesses in its approach, both when the Department sought to identify staff to work on the response and during their employment.

The report says that the Department has a good working relationship with other government departments such as the Foreign & Commonwealth Office and the Ministry of Defence. However, it could do more to manage the risks to value for money of working through partners. For many of its interventions, the Department does not have a good understanding of how much of its funding benefits recipients, and how much goes to meet costs partners incur in supporting the delivery of assistance, such as security.