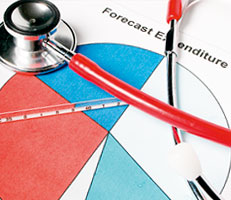 Securing the future financial sustainability of the NHS

The NHS delivered a £2.1bn surplus in 2011-12 but there is some financial distress in NHS trusts with some very large deficits.

"So far the NHS is meeting the challenge of maintaining strong finances in a period of austerity. It is clear, however, that parts of the service are under strain. "For value for money to be delivered in future, two things are required: firstly, careful management of the risks created by transition to a new commissioning model; and, secondly a coherent and transparent financial support mechanism which outlines when trusts should be supported, or allowed to fail."

A report published today by the National Audit Office has found that, although in 2011-12 there was a surplus of £2.1 billion across the NHS as a whole, there is also some financial distress, particularly in some hospital trusts.

According to today’s report, in 2011-12 there was a large gap between the strongest and weakest NHS organisations. The difference was particularly marked in London.

In the long term, achieving financially sustainable healthcare is likely to mean changes to how and where people access services, and some local commissioners are already consulting on and developing plans to do this. At the moment, however, in order to break even, some organisations have relied on additional financial support from within the NHS. According to today’s report, 10 NHS trusts, 21 NHS foundation trusts, and three Primary Care Trusts (PCTs) reported a combined deficit of £356 million. The NAO estimates, based on a census of PCTs, that without direct financial support, a further 15 NHS trusts and seven PCTs may have reported deficits.

There are four foundation trusts and 17 NHS trusts which between 2006-07 and 2011-12 needed injections of working capital from the Department of Health totalling £1 billion. Among these, between 2006-07 and 2011-12, the Department issued a total of £356 million to South London Healthcare NHS Trust and its predecessor bodies, and £195 million to Barking, Havering and Redbridge University Hospitals NHS Trust.  The Department anticipates that NHS trusts and NHS foundation trusts are likely to need around £300 million more public dividend capital in 2012-13.

Of the PCTs responding to a National Audit Office census, 51 per cent said they were concerned about the financial sustainability of their healthcare providers. Previously, PCTs and Strategic Health Authorities (SHAs) have been able to support otherwise weak providers. It is not yet clear whether clinical commissioning groups and the NHS Commissioning Board will agree to provide financial support to providers, in the way that SHAs and PCTs have done.

The NAO concludes that it is hard to see how continuing to give financial support to organisations in difficulty will be a sustainable way of reconciling growing demand for healthcare with the size of efficiency gains required within the NHS. Without major change for some providers, the financial pressure on them will only get more severe.