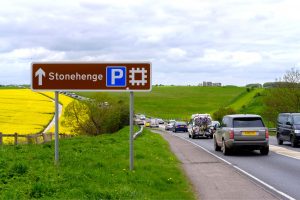 National Audit Office report: Improving the A303 between Amesbury and Berwick Down

Improving the A303 between Amesbury and Berwick Down

This report makes early observations on the progress and risks in upgrading the A303 between Amesbury and Berwick Down.

In December 2014, as part of the first Road Investment Strategy, the Department for Transport (the Department) committed to building a tunnel of at least 2.9 kilometres (1.8 miles) beneath the World Heritage Site at Stonehenge. This has since increased to 3.3 kilometres following public consultation and discussion with heritage stakeholders. The Department and Highways England expect the project to reduce congestion along the A303 between Amesbury and Berwick Down in Wiltshire, improve the setting of the World Heritage Site and, in combination with other projects along the route, support economic growth in the South West of England.

The A303 Amesbury to Berwick Down project forms part of the A303 and A358 road corridor that links the South East and South West of England. This corridor has more than 35 miles of single carriageway. There is more traffic on the road than the single carriageway sections are designed for, which results in high levels of traffic and slow and unreliable journeys. Local authorities and businesses along the route consider poor road connectivity as a major barrier to economic growth in the region.
In the Road Investment Strategy, the Department said it aimed to upgrade the entire A303/A358 road corridor to dual carriageway standard over the next 14 years through eight individual projects. It committed £2 billion to starting three of these projects, including the A303 between Amesbury and Berwick Down, by March 2020. The Amesbury to Berwick Down project is still at an early stage. The expected range of costs is £1.5 billion to £2.4 billion and the Department and Highways England expect the upgraded road section to be open to traffic by December 2026.

This report follows on from our 2017 report, Progress with the Road Investment Strategy. It makes early observations on the progress and risks of constructing a tunnel through the World Heritage Site at Stonehenge, including:

The report does not look at other routes in the South West. Given the project is at an early stage, we do not seek to conclude on value for money. Instead, we highlight factors that will be relevant in the future to the overall value for money of the tunnel at Stonehenge and wider investment along the road corridor.

Concluding remarks
In pure economic terms, because of the high cost of building a tunnel, the Amesbury to Berwick Down project, at £1.15 of quantified benefit for every £1 spent, has a significantly lower benefit–cost ratio than is usual in road schemes. Given our experience of cost increases on projects of this kind, this ratio could move to an even lower or negative value. It will be even more important therefore that the Department and Highways England ensure that the project meets its strategic and heritage objectives, and that Highways England manages the project well. Currently, there are risks to Highways England’s approach that it will need to manage to ensure future value for money for the Amesbury to Berwick Down project, and its other investments along the A303/A358 corridor.