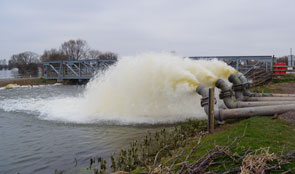 The Environment Agency has improved the cost effectiveness and prioritization of its flood risk spending but current spending is insufficient to meet many flood defence maintenance needs.

“Against a background of tight resources, the Agency has improved how it prioritizes its spending, including on the maintenance of flood defences. On this measure the Agency is achieving value for money. However, if we set aside the emergency spending in response to last year’s floods, and give due credit for efficiency improvements, the underlying spending on flood defences has gone down. The Agency, as it recognizes, will need to make difficult decisions about whether to continue maintaining assets in some areas or let them lapse, increasing in future both the risk of floods and the potential need for more expensive ad hoc emergency solutions. The achievement of value for money in the long term remains significantly uncertain.”

In the face of increasing flood risk in England and pressure on defences, the Environment Agency has improved the cost effectiveness and prioritization of its flood risk spending. However, Defra and the Agency have limited resources and current spending is insufficient to meet many of the maintenance needs the Agency has identified for its flood defences.

According to today’s report by the National Audit Office, in the areas where maintenance of flood defences has been given a lower priority – typically, where there are few homes – this will increase the danger of deterioration of defences, thereby increasing flood risk.

The government made an extra £270 million available following the winter storms in 2013. This included an additional £35 million for asset maintenance in both 2014-15 and 2015-16. In cash terms, this has restored maintenance funding to 2010-11 levels. However, this represents a real terms decrease of 6 per cent between 2010-11 and 2014-15. Excluding the one-off funding of £200 million provided following the winter floods, total funding decreased in real terms by 10 per cent in the same period. Sustaining the current standard of flood protection is challenging in this context, especially as climate change increases the load on flood defences.

Today’s report found that the Agency’s projects for the construction of new defences provided good value, and that it has a robust process in place to prioritize its spending on maintenance, based on the benefits and risks identified in flood risk models. The Agency, however, funds maintenance in higher risk areas first, and so may not be able to fund maintenance elsewhere. It recognizes that it needs to make difficult decisions around whether to continue maintaining some flood defences. As of August 2014, 1,356 asset systems (50% of the total) with a lower benefit-cost ratio– were being maintained to a minimal level. These are likely to deteriorate faster as a result, increasing replacement costs in the long term where assets are retained.

The Agency holds estimates of how maintenance expenditure will affect the lifespan of various types of flood defences and has used this information nationally. However, it has not communicated at a local level how reducing the prioritization of maintenance in some areas might affect flood risk and lead to asset failure.

The Government aims to encourage communities to take steps to manage their own flood risk. The Agency takes an active role in sharing good practice, building local capacity, and engaging directly with communities. The NAO found, however, that the expectations of communities could be better managed, for instance when maintenance regimes are changed.

The Department is working with local authorities, encouraging them to publish quickly their local strategies for dealing with future floods. As of March 2014, only 16% had done so, despite this requirement being in place since 2011.