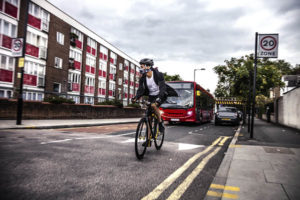 This report examines government’s progress in tackling local breaches of NO2 limits and its performance on air quality more broadly.

The UK has legal air quality limits for major pollutants at a local and national level, covering pollution from ammonia, particulate matter, nitrogen oxides, non-methane volatile organic compounds, sulphur dioxide, and more. Most of these legal limits were met between 2010 and 2019, with the exception of the nitrogen dioxide (NO2) annual mean concentration limit, for which there have been longstanding breaches. The Department for Environment, Food & Rural Affairs (Defra) and the Department for Transport (DfT) established the Joint Air Quality Unit (JAQU) in 2016 to oversee delivery of the NO2 Programme (the Programme) – government’s largest dedicated air quality initiative.

Government published a Clean Air Strategy in January 2019 outlining its approach to air quality more broadly. Government expects to publish an update of its National Air Pollution Control Programme in September 2022 to set out the measures that will be required for the UK to meet its 2030 national emissions limits.

This report examines government’s progress in tackling local breaches of NO2 limits and gives an overview of its performance and approach to air quality more broadly. We evaluate whether government is on track to achieve value for money from its spending on the Programme, within the constraints imposed by the legal requirement to deliver compliance in as short a time as possible. While a significant part of our focus is on NO2, we recognise the level of concern about other pollutants, especially fine particulate matter, and that is covered in our broader overview of air quality.

As part of examining government’s management of the Programme and its understanding of progress, we summarise the information government holds on local authorities’ progress with measures to tackle NO2 breaches, but we have not independently verified this information, or assessed the realism of government’s expectations. We have not assessed, and make no judgement about, the performance of any individual local authority in relation to air quality.

The Programme, established to tackle illegal and dangerous levels of pollution, has become government’s largest dedicated air quality initiative. Government has made progress, with measures fully implemented in 14 local authorities and four sections of the Strategic Road Network. However, the Programme has not moved as fast as expected. While this is undoubtedly due in part to the COVID-19 pandemic, other factors including the effectiveness of public engagement have likely played a role, and government has not had a good overview of the relative impact of different issues. It has also been slow to consider the case for national action to tackle the challenges on major roads and motorways that mean overall compliance cannot be achieved until after 2030. This is more than four years later than government expected when it published its plan for tackling NO2 in 2017. For these reasons we cannot yet be confident that the Programme is on track to deliver value for money.

NO2 is only one source of air pollution, and there is particular concern about the health risks from particulate matter and ammonia. Government is not yet clear how it will meet existing 2030 ceiling limits, and expects to set new long-term targets for particulate matter by October 2022. It will need to move quickly with robust plans to meet these targets if it is to put itself in a good position to meet them and secure value for money from its work on air quality.

Government publishes a lot of air quality data, but not in a way that gives the public accessible information about air quality problems and action in their area. There has been little public engagement at a national level about the purpose and progress of the Programme and the choices government has made to tackle breaches. This creates a lack of transparency which risks undermining value for money because positive public engagement is important for success across the Programme and government’s wider work on air quality.