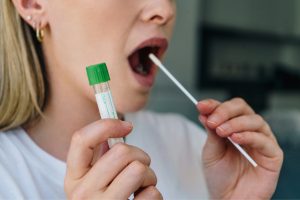 This is the second NAO report on government’s approach to test and trace services in England.

This is the second of our reports on government’s approach to test and trace services in England and it focuses on the period from the beginning of November 2020. It follows our interim report in December 2020, which covered the period from the creation of the NHS Test and Trace Service (NHST&T) in May 2020 up to October 2020.

Test and trace services are designed to play a core role in government’s response to the pandemic, which has also included restrictions on social contact, travel, retail, workplaces and educational establishments, and from December 2020 the roll-out of the vaccination programme. Test and trace programmes for COVID-19 aim to reduce infections by identifying individuals with the virus, tracing their contacts and isolating them to limit further transmission.

This second report provides an update, focusing on the period from November 2020 to April 2021. It is factual and does not present a full value‑for‑money assessment. This reflects the time period covered and the changing and ongoing response to the pandemic. The report covers:

The primary goal of NHST&T is to help break chains of COVID-19 transmission and enable people to return towards a more normal way of life. Since it was established in May 2020 there have been two national lockdowns and more than four million confirmed cases. In order to break chains of transmission, SAGE advises that it is desirable that no more than 48 hours should elapse between identification of an index case and their contacts self-isolating, and that 80% of these contacts would need to be reached. NHST&T now reaches around 85% of all contacts, and has reduced the elapsed time to trace contacts for in-person PCR tests. However, in‑person PCR tests make up a declining minority of tests, and it is less clear whether the wider system is operating as quickly as it needs to. Since November, it has rolled out a national asymptomatic testing programme to seek to identify those people who do not know they have COVID-19. Only a small minority of the tests it has bought have been registered as used, and NHST&T is now undertaking research to understand the reasons for this with a work programme underway to bring about improvements. The success of the test and trace programme relies on the public coming forward for tests when they have symptoms, carrying out asymptomatic tests when they do not, and complying with instructions to self‑isolate where necessary. NHST&T is responsible for driving up public compliance, but research suggests that only a minority of people who have COVID-19 symptoms come forward for testing. It has no target for increasing this, the uptake of LFD testing or compliance with self-isolation.

NHST&T was set up at speed with a workforce heavily reliant on consultants. It had planned to reduce its dependency on consultants but has not yet done so. NHST&T operates in an environment of high uncertainty, where demand for testing and tracing can be affected at short notice by new variants, case numbers and policy decisions (for example, national lockdowns). It is therefore challenging to forecast costs with precision. However, there is a very wide margin between the underspend of around 10% that NHST&T discussed with the Committee of Public Accounts in January 2021, and the 39% underspend of its 2020-21 budget that it reported two months later. It has taken steps to increase the flexibility of its contracts for contact tracing and future laboratory use and has generally improved its provision of data to and engagement with local authorities. However, local authorities still struggle to get timely access to the data they need to deal with localised outbreaks of COVID-19, and they are unclear on the planned operating model after July 2021. To achieve value for money NHST&T must be able to demonstrate both that the interventions it delivers are effective in achieving its objective, and that the mix of interventions is the most cost-effective use of public resources.