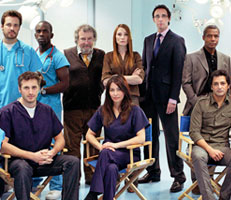 The BBC’s management of the costs of producing continuing drama

The BBC should strengthen its approach to achieving value for money in its soaps by being more systematic in comparing and challenging production costs and processes.

"The report shows the BBC has made real progress in delivering value for licence fee payers: an excellent achievement of which the BBC can feel proud. Popular, long-running dramas like Eastenders sit at the heart of the BBC schedule, generating loyalty from audiences as well as an environment for new writing, acting and production talent to flourish. They cost viewers less than they did ten years ago, while audience approval is on the up. "We accept the majority of the NAO's recommendations, with the exception of the suggestion that the BBC should set targets at programme level. We believe there is a risk that this could harm the BBC's ability to produce distinctive programming by acting as a disincentive to take creative risks and creating unnecessary bureaucracy." Anthony Fry, BBC Trustee with lead responsibility for value for money, 22 March 2011 "The BBC is doing a good job of applying basic financial controls and achieving steady cost reduction across its portfolio of continuing dramas. However, it should take a more holistic approach and compare the cost of these programmes with audience levels and opinions, both targeted and achieved, as these are critical measures of broadcast performance, and a key guide to whether the continuing dramas are delivering value for money."

The BBC Trust today published an independent report commissioned from the National Audit Office on the BBC’s management of the costs of producing continuing drama.

The NAO has concluded that, although the absence of formal audience-related performance objectives for individual dramas meant the NAO was unable to say whether the BBC is delivering value for money, the BBC has taken important steps towards achieving this.

The review found that production costs on these long running shows are tightly controlled, and that the average cost of producing an hour of continuing drama has fallen by 20 per cent in real terms over the last eight years, with the programmes being delivered on time and largely within budget.

The report recommends the BBC strengthen its approach to achieving value for money in continuing drama by being more systematic in comparing and challenging production costs and processes.

Key points from the report and the Trust’s response to them include: