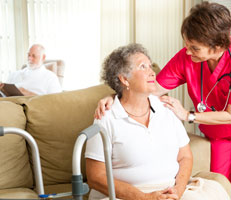 The Care Quality Commission: Regulating the quality and safety of health and adult social care

The Care Quality Commission had a difficult task in establishing itself and has not so far achieved value for money in regulating the quality and safety of health and adult social care in England.

"Against a backdrop of considerable upheaval, the Care Quality Commission has had an uphill struggle to carry out its work effectively and has experienced serious difficulties. It is welcome that it is now taking action to improve its performance.

"There is a gap between what the public and providers expect of the Care Quality Commission and what it can achieve as a regulator. The Commission and the Department of Health should make clear what successful regulation of this critical sector would look like."

The Care Quality Commission had a difficult task in establishing itself and has not so far achieved value for money in regulating the quality and safety of health and adult social care in England, according to a report by the National Audit Office today. The Commission missed deadlines for registering health and social care providers, other than NHS trusts, at the same time as levels of compliance and inspection activity were falling significantly.

The Commission, formed in 2009, had to merge three existing regulators to establish a new organisation and implement a new regulatory approach, which for the first time integrates health and social care. The Commission’s budget is less than the combined budget of its predecessor bodies, even though it has more responsibilities. Even so, it underspent against budget in both 2009-10 and 2010-11. This was partly because it had a significant number of staff vacancies. At the end of September 2011, 14 per cent of staff positions were vacant. The Commission was unable to fill vacancies as quickly as it might, because of government-wide recruitment constraints.

The process for registering care providers did not go smoothly. Although 21,600 providers are now registered, the timetable for two of the three tranches of registrations was not met. The Commission diverted inspectors from compliance activity to registration work in a bid to meet the timetable. As a result of this and the number of inspector vacancies, the Commission completed only 47 per cent of the target number of compliance reviews between October 2010 and April 2011.

In the absence of measures of impact, the National Audit Office assessed value for money in terms of whether the Commission delivered what it set out to deliver.