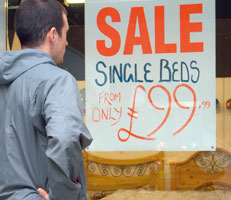 The Community Care Grant has an important role in helping vulnerable people to establish themselves in the community and in easing pressure on families. The scheme is designed to be flexible so that it can provide help in good time to those who need it but the scheme as currently designed does not deliver value for money.

"The Community Care Grant plays an important role in helping the most vulnerable in our society. The assessment process needs to be flexible and quick but the current scheme design does not deliver value for money. I would expect the Department for Work and Pensions to have better information on whether people are aware of the scheme, and for it to strengthen the systems for making sure that this money is spent on what was intended. There are opportunities to help more people, by reducing the cost and variation in spending on high priority items"

The Community Care Grant has an important role in helping vulnerable people to establish themselves in the community and in easing exceptional pressure on families. The scheme is deliberately designed to be flexible so that it can provide help in good time to those who need it but the scheme as currently designed does not deliver value for money, according to a report published today by the National Audit Office.

Under the £141 million scheme, vulnerable people can claim for money to pay for essential household items, such as a cooker or bed. Jobcentre Plus employees prioritise each request received, but the agency cannot be sure that those who apply were in most need. Inequities in the budgets set for district offices mean that some high priority claims have been refused because of the limited funds available locally. In addition, the large volume of claims that are never likely to receive funding have to be assessed under the same process, thereby adding considerably to the administrative burden.

Jobcentre Plus employees handle cases with sensitivity, despite having to process a large volume of applications, and, rightly, exclude non-essential items. The application form is relatively straightforward to complete but Jobcentre Plus employees essentially have to base their decision on what has been stated on the form, which makes it difficult to identify if claims are overstated. Jobcentre Plus does not know the extent of fraud as there are no checks on how the money is spent. Introducing a centralised contract to supply items directly could improve the control over the scheme and achieve economies of scale of at least £14 million a year.

There is no official price list for deciding how much to award for each item and there are variations in the prices on unofficial lists kept by each district office because of different specifications on products. Greater standardisation of the amount awarded for items could save up to £7.5 million a year.

The Department does not wholly agree with the conclusions of the National Audit Office. In the Department’s view it is in the nature of a discretionary scheme that there will be variations in the way in which judgments will be exercised and to operate the scheme in a more rigid, uniform way would fail to meet the needs of the vulnerable people it is designed to assist. The Department notes that it is required to operate the scheme within a legal framework and under tight constraints of turnaround time and resource availability.