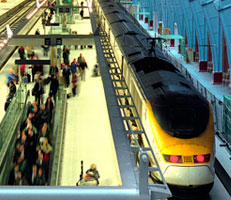 The completion and sale of High Speed 1

The HS1 project has delivered a high performing line, which was subsequently sold in a well-managed way. But international passenger numbers are falling far short of forecasts and the project costs exceed the value of journey time saving benefits.

"The High Speed 1 project has brought a number of significant benefits including quicker journey for passengers. However, the project went forward on the basis of hugely optimistic assumptions about international passenger numbers. These were not realised and the Department is only now developing its plan to evaluate whether the project was value for money."

The National Audit Office has today published a report on the construction and sale of the high speed railway line linking the Channel Tunnel with central London. The High Speed 1 project has delivered a high performing line, which was subsequently sold in a well-managed way which removed the taxpayer’s open-ended support for the project. However, international passenger numbers are falling far short of original forecasts and the project costs exceed the value of journey time saving benefits.

The line was delivered within the overall funding and timescale available for the project. However, this was at a higher cost and later than its targets. Construction of the line cost £6,163 million,18 per cent higher than the target costs. Despite missing these targets, this performance compares well with other railway projects. The line has performed well since it opened, with only 0.43 per cent of services being delayed in 2010-11 by infrastructure incidents, such as track or signal failures.

However, the number of international passengers using the line is lower than originally forecast. Actual passenger numbers between 2007 and 2011 were, on average, two thirds of the level forecast when the Department guaranteed the project debt in 1998, to enable the line to be built. This left the taxpayer exposed to the risk of lower-than-expected passenger income, which had been expected to repay the project debt.

London & Continental Railways Ltd (LCR), which is owned by the Department, is in partnership with private sector developers at King’s Cross and Stratford where development is under way. The original business case in 1998 was based on benefits to transport users from faster journey times and increased rail capacity and regeneration benefits. According to today’s report, the total value of these benefits is not known as the Department has started to identify the methods it will use to evaluate the project’s costs and benefits. The Department has not reassessed these costs and benefits since 2001, despite assurances to the Public Accounts Committee that it would do so.

In restructuring LCR before the sale, the Department for Transport removed open-ended taxpayer support and made the line an attractive opportunity for investors. The Department handled the sale well and, at £2,048 million, the winning bid was higher than expected.